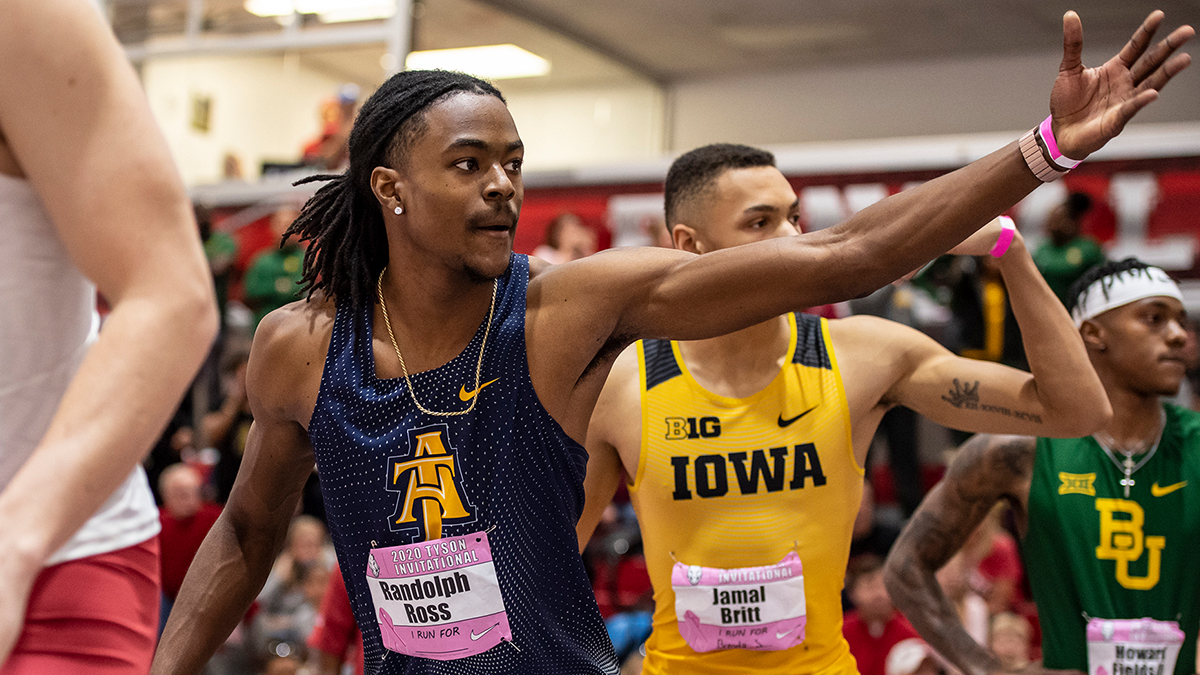 Randolph Ross number one in the country in 400 meters

Ross continues to soar during the indoor track season.

CLEMSON, S.C. – Four men ran below 46-seconds in the 400 meters on Friday at the Tiger Paw Invitational at the University of Clemson’s Rock Norman Track and Field Complex.  On Friday, the fastest of those men is named Randolph Ross, Jr., a North Carolina A&T sophomore out of Garner, N.C. Ross ran a personal-best 45.21 to win the 400m on the first day of the meet for the N.C. A&T men’s and women’s indoor track and field teams.

His time is tied for the 13th-fastest 400m indoor time by a collegiate competitor in NCAA history. His performance also makes him the No. 1 400m runner in the country.

Randolph Ross is setting up to have a busy weekend at the 2021 NCAA Indoor Track and Field Championships, scheduled for March 12-13 at the University of Arkansas in Fayetteville, Ark. In addition to being No. 1 in the 400m, he and his 4×400-meter relay teammates are No. 1 in the nation as of Friday, thanks to a 3:04.62 timed at the Carolina Challenge on Jan. 23 at the University of South Carolina. As of Friday, he is also No. 5 in the country in the 200m with a time of 20.64 timed at the USC on Feb. 5.

“Junior is tremendously talented,” said his father and N.C. A&T’s director of track and field programs, Duane Ross. “More importantly, he’s a great young man. He set many goals at the beginning of the season, and he’s determined to see them through. What he means to this team through his attitude and work ethic is priceless.”

The younger Ross was not the only success story on Friday. Another one of those four men who went below 46-seconds in the 400m is N.C. A&T senior Trevor Stewart. Stewart ran an indoor personal-best 45.55 to finish third. Senior Elijah Young ran a 400m personal-best 46.92 to finish 10th.

Senior Tavarius Wright continued his outstanding first season as an Aggie as he won the men’s 60m in 6.57. He is now second in the country in the 60m with another day remaining to compete this weekend for collegiate competitors. Wright had the second-fastest qualifying time on Friday in the 60m at 6.71. His previous best time was 6.64 at USC on Feb. 5.

Freshman Javonte Harding finished fourth in the 60m (6.77) after having only the eighth-fastest qualifying time at 6.84. Junior Malcolm Croom-McFadden finished fifth (6.77).

Junior Delecia McDuffie also entered personal-best territory when she finished the women’s 400m in 53.28 to finish third. The qualifying time for NCAAs in the women’s 400m will be under 53-seconds.

Three Aggies earned season-bests in the women’s 60-meter hurdles. Two of those Aggies exhausted their NCAA indoor track and field eligibility last season. Sophomore Paula Salmon is still competing for the Aggies as she ran 8.18 to finish sixth.

Madeleine Akobundu and Tejyrica Robinson ran unattached and finished fifth (8.16) and seventh (8.20). All three ladies will compete for the Aggies during the outdoor season.

The women’s 60m saw junior Cambrea Sturgis finish fifth in 7.32 after qualifying with a time of 7.38. Junior Kamaya Debose-Epps finished seventh in 7.38.

Off the track, junior Brandon Hicklin finished fifth in the men’s long jump with a leap of 24-feet, 3-inches. Hicklin’s 25-foot, ¾-inch jump at USC on Jan. 23 has him ranked 11th in the country. Sophomore Morris Kimble ran the mile 4:25.42 to finish 16th.

The Aggies return to competition at Clemson on Saturday. Among the standout races on Saturday will be the women’s 200m that will feature Sturgis, McDuffie, Debose-Epps, freshman Jonah Ross and junior Symone Darius.

Randolph Ross, Harding, Wright, junior Malcolm Croom-McFadden, junior Daniel Stokes and Young will compete in the men’s 200m. The N.C. A&T women will run two 4×400 teams on Saturday. The men will run their No. 1 4×400 team as well.

Randolph Ross number one in the country in 400 meters