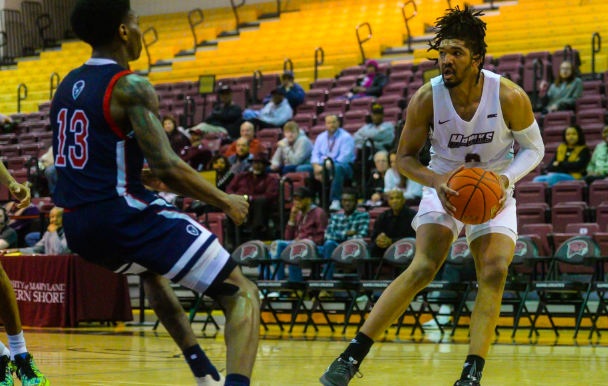 The Hawks fly over the Bison for their first win of the season.

Saturday’s victory was the first win for head coach Jason Crafton over a Division I opponent. The Hawks first win of the season was against Division III Clarks Summit.

“This game was a testament to the guys sticking together after a tough stretch to start the season,” Crafton said. “They found a way to put 40 minutes together of playing with toughness and executing our game plan.”

Howard jumped out to a 15-4 lead seven minutes into the first half. The Hawks responded with an 11-0 over the next three minutes that was capped by a pair of free throws from redshirt sophomore Walter Prevost (Houston, Texas) to tie the game.

HU opened the second half with new energy as they outscored the Hawks 15-4 in the first six minutes of the frame. The lead would change hands a few times over the next few minutes until senior AJ Cheeseman (Snellville, Georgia) hit a pair of free throws at the 12:14 mark to give the team a 49-48 lead that they would not surrender for the remainder of the game.

“AJ is a veteran guy that has experienced MEAC play before and regardless of his ups and down this season, I believe in him,” Crafton said. “He did a good job of fighting tonight and he had a big night for us.”

Junior Ty Gibson (Brooklyn, New York) also was in double figures for the Hawks as he had 14 points. The Hawks had a season high 17 assists as a team as redshirt senior Ahmad Frost (Cincinnati, Ohio) led the team with four dimes and no turnovers.