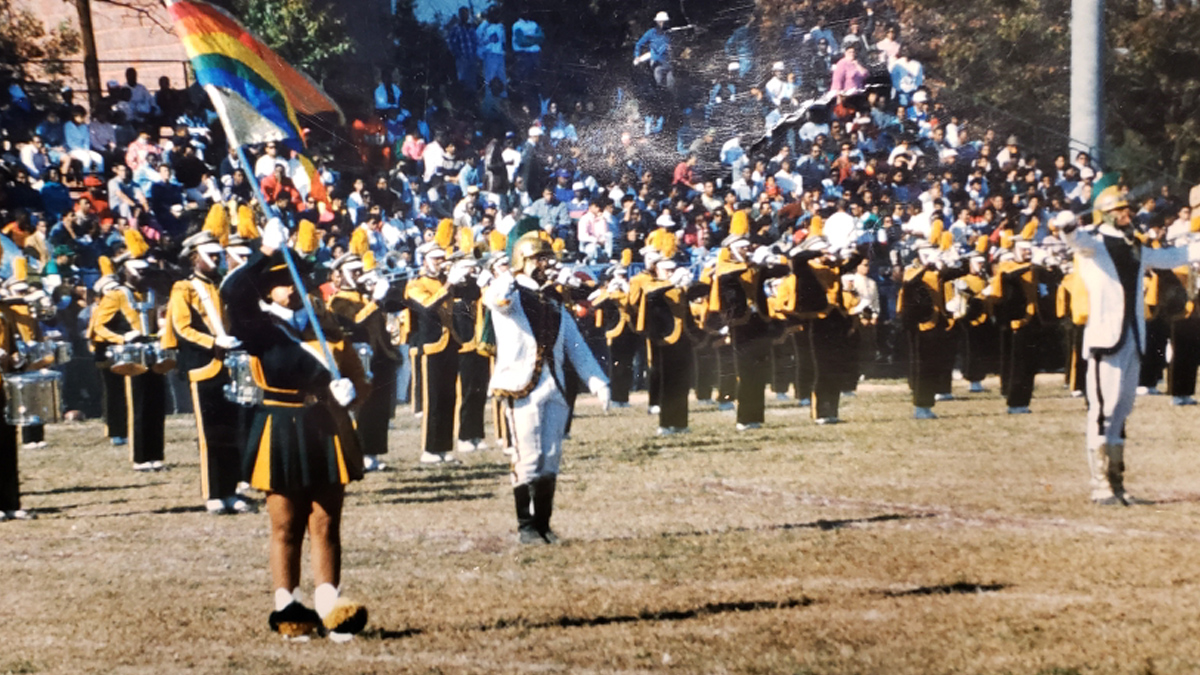 The Origin of ‘Neck’: How Cameo’s hit became an HBCU band anthem

Cameo dropped “Talking Out The Side of Ya Neck” 35 years ago and the HBCU world has never been the same since. How did it start?

HBCUs have a long and illustrious history of athletic and band achievements. When attending an HBCU sporting event, attendees should expect to see a tailgate, the Royal Courts, the NPHC (National Pan-Hellenic Council), alumni of all ages, athletes, and without a doubt, they will experience a black college band performance.

Each HBCU marching band has its own flavor, style, and prestige making them special in their own right. However, they all share one special song:Cameo’s “Talkin Out the Side of Yo Neck.” Since its adoption, everyone in the HBCU community agrees this is a timeless marching band anthem, but like most great traditions, many bands like to claim they were the first to perform it. Until now, no one could truly lay claim to the elusive title of originator. On December 22, 2019, I found out in the basement during a family function in Prince George’s County, Maryland.

I was asked to attend a family gathering by my friend Kathryne Burton. The get together was at her friend, Aerika Anderson’s home. This would be my first time visiting and I knew her dad was my frat brother so I decided to go. Once I found out he was from Pi Gamma chapter of Omega Psi Phi Fraternity Incorporated, it was instant love at that point. The night was winding down and the remaining people congregated to the basement at the bar downstairs. As we were having great conversation and good laughs, I overheard something that I found to be groundbreaking.

Anthony “Tony” Anderson, a native of Richmond, VA, a graduate of Norfolk State University and Spring 1985 initiate of the Pi Gamma chapter of Omega Psi Phi Fraternity Incorporated, mentioned the song “Talkin Out the Side of Yo Neck.” Anderson was one of the well-respected leaders of NSU’s Spartan Legion in 1984. Anderson continued the conversation and in a split second, he tapped his chest twice and emphatically.

“I’m the one who started playing Neck first,” he beamed proudly. “We played that back in 1984!”

Everyone outside of family and friends, who had obviously heard the story before, were shocked.

Like us, many people are not too sure of the origin behind Neck and who played it first. I thought a SWAC school was the first to do it. My friend, Chelsea Chambers thought it was Southern University who started it in the late 90s. So it was only right to hear the whole story behind the HBCU marching band anthem. Denise Anderson, who was an original “Hot Ice” dance line member back in 1984 co-signed and confirmed that Tony was the person to bring the idea to the rest of the band. She even called her dance line sister, Stephanie Wright-Jenkins, for further confirmation. Denise and Wright-Jenkins were apart of the Hot Ice’s Original Six, which started back in 1983.

Tony Anderson, who was a trombone player during the 1984 season and later became drum major in 1985, continued to go in-depth with the story of how he came up with the idea.

“I was riding back to Hampton with my brothers, we were passing the Williamsburg exit on I-64 and the song came on and I knew I wanted to use this song. The title and the blaring horns are what called my attention to the song being that Hampton U always talked trash as rival bands did. This was a week before we played Hampton. I had to write down the lyrics, the notes and buy the tape but I knew this was it!”

When Anderson got back to campus, that week of practice for him was just another day in the office for the Spartan Legion. Anderson walked in the band room and said: “we’re doing this!” The band director at the time was Emery Fears. Fears gave Anderson the freedom to handle the execution of this song for their upcoming game against Hampton University, the rivalry known as The Battle of the Bay.

Hot Ice member, Wright-Jenkins spoke on her time as a dancer during the 1984 season.

“When Tony came in the band room with those tight shorts on and told everyone we’re going to do this song, we were ready,” she recounted. “The practices that week were tough but it was always tough. The practices at Norfolk were run like a boot camp. We were a very disciplined band. The tempo was so fast. The Spartan Legion was one of the baddest bands in the land during my time at Norfolk State.”

After a long week of practice, the Spartan Legion was ready to perform for the Hampton and Norfolk crowd. This was an away game for the Spartans but that made the occasion better in the eyes of Wright-Jenkins.

“I don’t think any of us predicted it would be what it is today. We really wanted to get back at Hampton for stealing our show the year before. So we incorporated Neck as a mini dance and we jumped to the side and pointed to our neck. Gives me chills just talking about it.

“The crowd went crazy over the song. They yelled from the first up 2! It caught on like nobody’s business.”

The Spartan Legion completed their performance and to put the icing on the cake, Norfolk State defeated Hampton University 15-7 in the Battle of the Bay. That was also the day that Neck became the Spartan Legion anthem. Prior to this game, “Warren’s Jam,” was the Legion’s original anthem.

It was a banner year for NSU. The school won the CIAA basketball and football titles that year, and apparently its band was at the forefront of a new movement.

There has been a ton of speculation behind who came up with Neck but one thing that can be confirmed is the impact Anderson and the Spartan Legion had on America’s Marching Band culture. Anderson spoke on the expansion of the song throughout the numerous marching bands locally and statewide.

“After we played it, we got so much approval from it, that became our anthem,” Anderson said.  “Then others started catching onto it and playing it as well. See, Norfolk is a big feeding area and all the local middle school, high school, and college bands in the area started to play it and that was because of us. It’s still a big thing because it’s a song that every marching band plays now. You ask anybody from Norfolk State back in the day and they’ll tell you that we started that. So to hear not only HBCUs but PWIs (Predominantly White Institutions) like LSU and Ohio State playing it was crazy.”

“For 35 years, NSU has maintained that as our anthem without really saying it, but again all you need to hear is the first bass note, and the crowd goes into a frenzy.”

To be the originator of something so important to not only Black culture but band culture has to feel like a tremendous accomplishment. There has been chatter that the SWAC may have played it first in 1984 but according to Wright-Jenkins, the impact of Neck belongs to Norfolk State’s Spartan Legion, then a band in the CIAA.

“I want the credit to be given where it should. To hear elementary, middle, high school, black college, and PWIs are playing it. I believe Hampton was the first to play it after us because they copied everything we did. Then Howard was after Hampton. I was told that Texas Southern may have played it the same year but to my knowledge, the SWAC didn’t catch onto Neck until the 90s. Neck is the most influential song to bands. Everyone across lines plays Neck. It’s almost as common as hearing the Star-Spangled Banner every time you go to a college sporting event.”

For 35 years, Neck has become the most notable band song to be played throughout the country. When the song starts, you can see how infectious the sound is to a crowd. At HBCUs, you will see people dancing and members of the D9 strolling to this song. Chances are if you went to an HBCU football game and this song played, you will see members of Omega Psi Phi setting it owt to Neck. That’s most fitting considering Anderson is also a member.

There is no definite answer to who started playing Neck first but one is hard-pressed to hear a story like this one and not believe it. And remember, there was no Youtube to document what was played on a weekly basis. The way Anderson and Wright-Jenkins spoke of this cultural phenomenon gave me no reason not to believe that the Spartan Legion were the pace-setters to the marching band anthem. In my conversations with them both, the most important characteristic of this story is impact. Neck will be a song that will be played for many more years to come.

Thank you, to Anthony “Tony” Anderson and the Spartan Legion for their attribution to the culture.

The Origin of ‘Neck’: How Cameo’s hit became an HBCU band anthem