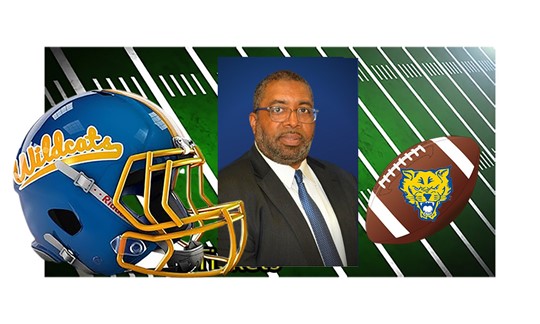 Fort Valley State’s new football coach has plenty of experience in the CIAA, SWAC and SIAC.

“I’m elated to welcome Maurice Flowers to Fort Valley State University as our new head football coach,” said Holloman. “Coach Flowers’ career of bold and effective leadership on the field and his commitment to the development of student-athletes off the field will make him an ideal fit for our Wildcat program.”

Prior to MVSU, Flowers served as the Fayetteville State University offensive coordinator over the 2017 and 2019 season. Both years he led the team to the CIAA South Division titles and the CIAA championship. His offense was one of the top offenses in the Central Intercollegiate Athletic Association, averaging 34 points per game and while under his direction for the 2019 season, six offensive players earned All-CIAA recognition.

Coach Flowers spent the 2015 season at Miles College and helped lead them to the SIAC Championship.

“We’re looking forward to Coach Flowers helping to inspire our players as he leads the Wildcats to the next level of success,” Jones said. “He’ll make a great addition to our Wildcat Family.”

Flowers said he was honored to be the next head football coach at Fort Valley State.

“I would like to thank our president, Dr. Paul Jones, (Interim) Athletic Director Anthony Holloman and members of the search committee,” Flowers said. “Fort Valley State has a tradition of championship football. We will build on that foundation towards building the next Wildcat SIAC championship team.”

“We had some great candidates as part of our national search for a new head coach,” Towns said. “Flowers unequivocally stood out as a stellar head football coach for Fort Valley State’s program and we expect him to continue our legacy of SIAC (Southern Intercollegiate Athletic Conference) dominance and outstanding gridiron action.”

Georgia Representative and Chair of the FVSU Foundation Calvin Smyre said he anticipates that FVSU fan base will be energized by the selection of Flowers as the new head coach.

“Fort Valley State University’s Wildcat family needs to get ready for some dynamic football,” said Smyre, also an FVSU alum. “Football fans, now is the perfect time to get your season tickets because you will not want to miss this upcoming football season.”

The South Bend, Indiana native, is a graduate of Johnson C. Smith University, where he earned a degree in communications. He and his wife Tonya are the proud parents of three daughters, Madison, Meghan and Tomi.