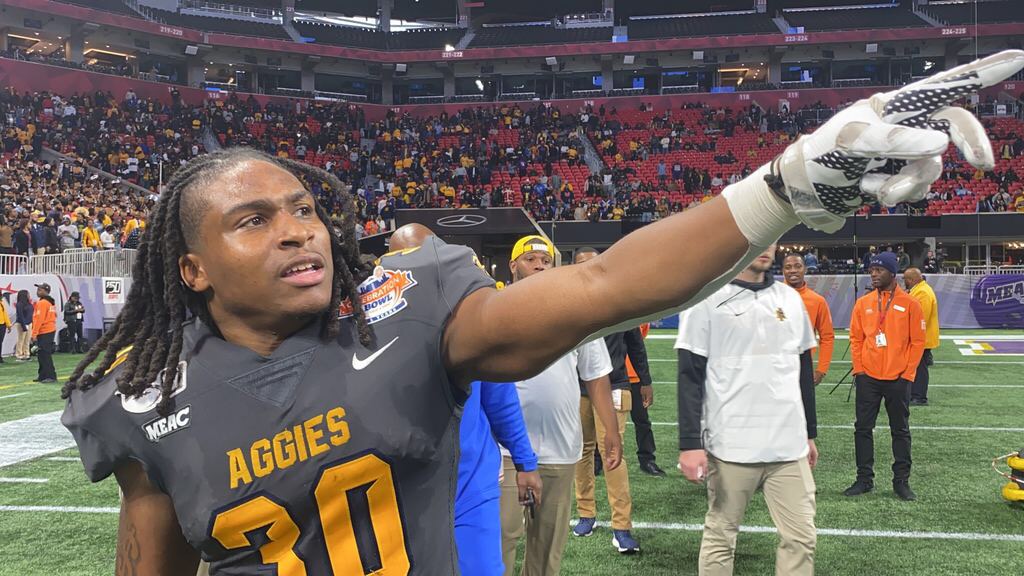 ASU’s Felix Harper went to work early against the Aggie defense. After letting up a field goal early, the Aggies responded. Kylil Carter threw a dart for the Aggies to Elijah Bell for 53-yards, capping a drive where the Aggies took over a minute to drive 65-yards. The Braves came right back, taking only six plays to drive 74-yards for a touchdown. Harper found Chris Blair to finish that drive.

The lead was 10-7 and things were going Alcorn’s way. But the experienced Aggie’s team scored 24 unanswered points. Carter found Leslie for a 59 yard touchdown in the 2nd quarter and connected with Banks with less than a minute left in the quarter as well to send the Aggies into halftime with a 14-point lead.

Jah-Maine Martin shook the stadium with a 74-yard touchdown run after only touching the ball once in the first half. The Aggies were sitting pretty on a 31-10 lead. Alcorn did not quit as they went on three 75-yard touchdown drives in the 3rd quarter. Felix Harper accounted for one on the ground and one in the air to Raidarious Anderson. De’Shawn Waller picked up a touchdown on the ground. A&T wasn’t done either, though. The Aggies accounted for three more scoring drives. Kylil Carter threw touchdown passes to Hunt for 43 yards, Bell for 20 yards, and Banks for 73 yards. In the process, he tied a 34-year old A&T passing record with six TD’s in a game.

When the dust settled on the third quarter: 49 total points were scored, 520 total combined yards were gained, the first six drives of the quarter were scoring drives, and the Aggies had a 52-31 lead. Also, that broke the Celebration Bowl record for points scored in a quarter.

Pile on the points

As the fourth quarter started with the Aggies with possession, Jah-Maine Martin fumbled and it was recovered by Taurence Wilson for the Braves, putting them in the red zone. Harper once again passed for a touchdown, this time to Nigel Wood. The shift shrunk the Aggies lead to 52-38.

Carter had his way for the Aggies once again, converting a 3rd and long and a 4th and two within field goal range. Noel Ruiz added a field goal to bring the Aggies point total to 55 points. The Braves scored again after a 75-yard drive, but the Amir McNeil for the Aggies returned the fumbled extra point attempt to the house for two points. The game was shifted back to a two-possession game as the Aggies led 57-44 with less than five minutes in the contest. Carter ran for 55 yards for A&T on the next drive, resulting in a Jah-Maine Martin touchdown on the following play. The Braves did not score again as the Aggies sealed an explosive victory in Atlanta. During the third meeting between the two programs in the Celebration Bowl, the Aggies won again by a score of 64 to 44.

Kylil Carter did not let the gas off the pedal for A&T and racked up over 450 total yards and six touchdowns in the air. Four different Aggie receivers had a touchdown during his dominant performance. Jah-Maine Martin scored two touchdowns and gained 110 yards on 16 carries.

In the loss, Harper scored five touchdowns for the Braves. He threw for 341 yards and passed for three TD’s, while rushing for the other two.