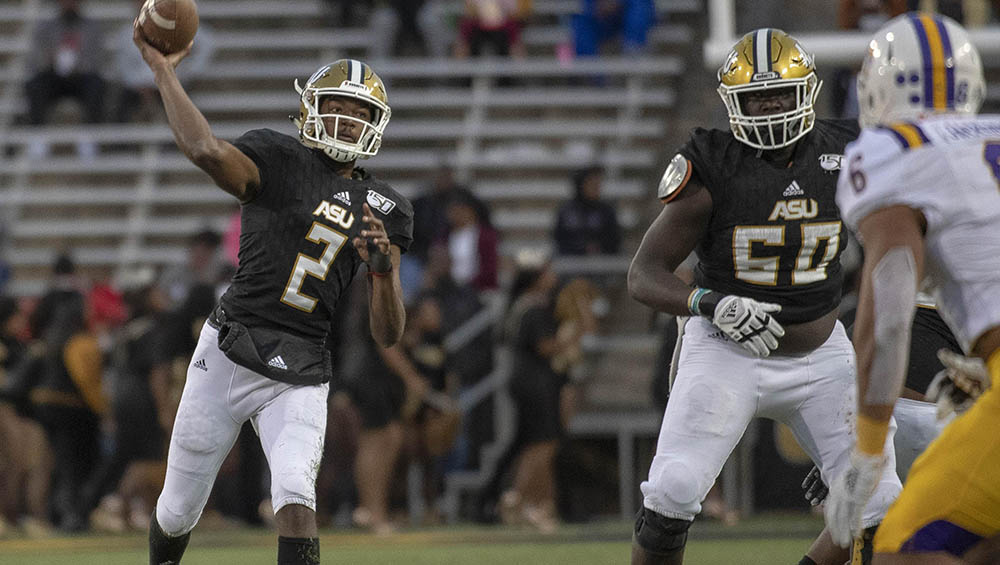 Panthers seal the deal in the final seconds versus Alabama State.

MONTGOMERY, Ala. | After falling behind by 17 points in the third quarter, a late rally by Alabama State fell short in the final seconds of the 96th annual Turkey Day Classic as the Hornets fell 20-17 to Prairie View A&M in Southwestern Athletic Conference (SWAC) action Thursday.

After taking an early 3-0 lead, Alabama State gave up 20 unanswered to Prairie View A&M (6-5, 4-3 SWAC) before a touchdown at the end of the third quarter cut the deficit. The Hornets were able to take advantage of a penalty for a free play with the clock stopped at the end of the quarter, when KHA’Darris Davis hit Michael Jefferson on an 11-yard pass to trim the score to 20-9 after the extra point was missed.

The Hornets were able to keep Prairie View off the board and drove the ball down the field in 13 plays, covering 69 yards with 9:40 remaining in the contest. The drive culminated with a 10-yard touchdown pass from Davis to Jefferson to trim the deficit to 20-15, before the two hooked up again for the two-point conversion to cut the deficit to three at 20-17.

With three timeouts remaining and having to punt the football, Alabama State gave up a pair of first downs on the Panthers’ final drive before forcing a stop and getting the ball back with 1:49 to play. Facing a fourth down and a pair of third down conversions, Alabama State (5-6, 4-3 SWAC) drove down the field to set up a 30-yard field goal to tie the contest with just seven seconds remaining. However, the kick never happened as the snap was mishandled and Hanson had to hurry the kick right into the line of scrimmage for the final margin.

Ezra Gray led Alabama State on the ground with 60 yards on 14 carries, while also adding four receptions for 62 yards – including a reception to help set up the last-second field goal attempt. Davis finished the night with 207 yards passing on 25-of-46 passing on the night with a pair of touchdowns.