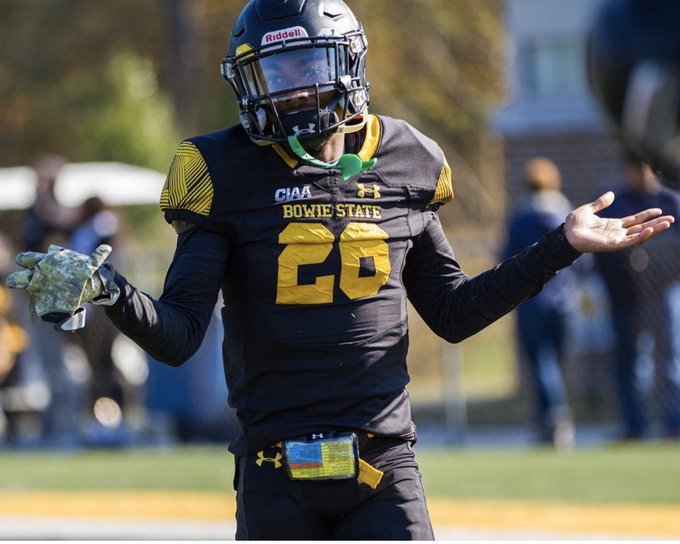 BOWIE, MD- A 45-point final score difference was just a cherry on top for the Bulldogs on Saturday afternoon. Bowie State won 65-20 against Lincoln (PA) and reclaimed the Northern Division for the fourth time in five years, and two in a row.

Ja’Rome Johnson led the three quarterback rotation with 160 yards and two touchdowns. Defensive back John Johnson IV celebrated Senior Day as the rushing leader with a 39-yard run, and receiver Montez Clay led the way with five catches for 66 yards and a touchdown. Sophomore defensive back Demetri Morsell finished with two interceptions, both pick-sixes, for 98 total yards.

LUPA found the end zone with a 29-yard touchdown pass, but a blocked extra point ended the quarter at 28-6. The Bulldogs controlled the entire second quarter. A three-yard Calil Wilkens rushing touchdown and goal-line reception from Victor Olyakina put BSU up 42-6 with 10:06 left before halftime. Quarterback Gaston Cooper entered the game and threw a 22-yard touchdown pass to Clay, and Morsell returned another interception to the house to take BSU into halftime up 55-6.

The second half was much calmer. A three-yard end zone rush from Derric Kittrell and 40-yard field goal from kicker Gene Carson raised the lead to 65-6 at the end of the third quarter. LUPA found the end zone twice through the air with 5:55 left in regulation to put up 14 unanswered points and bring the final score to 65-20.

BSU’s season concludes on the road against Elizabeth City State on Saturday at 1:30 PM. The Bulldogs will face the Southern Division winner and fight for their second consecutive Championship November 16 in Salem, VA.

Jackson State gets key win over UAPB
Bowie State, FAMU and A&T move up in national polls
To Top
X