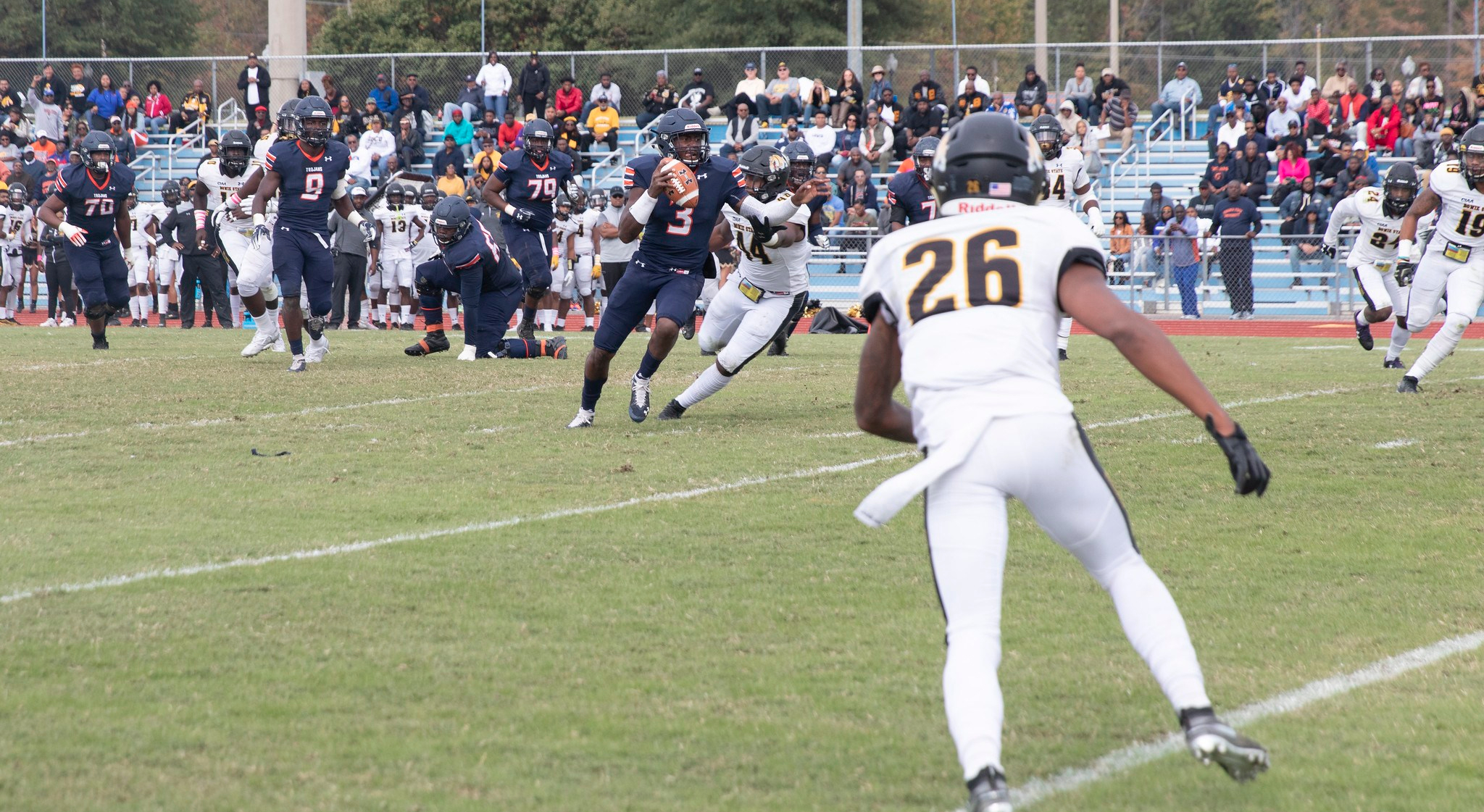 There are three weeks remaining before the end of the CIAA football season and there is no clear-cut leader of the North Division.

There can only be one CIAA North champion, and three teams have been relentlessly battling for the crown this season.

Before last Saturday, Bowie State was in first in the north, Virginia State in second and Virginia Union in third. The three teams had won at least four consecutive games and were all undefeated in conference and divisional play. Circumstances changed at the conclusion of Week Seven, however, thus affecting standings. Each team is fully equipped with impressive stats and performers to power them to the finish line, but who will best whom for the crown?

VSU saw its five-game win streak end in the 24-14 homecoming loss against BSU. Quarterback Cordelral Cook led the team in passing and rushing with a 233-yard day, 134 passing yards and 99 yards on the ground with a rushing touchdown.

The loss was the lowest scoring performance of the season for the Trojans; the only where they were held under 20 points. Cook also didn’t have the easiest day taking five sacks, throwing no touchdowns and two picks. This brings Cook to an even six touchdowns and interceptions this season, a less-than-ideal ratio. Simultaneously, he’s fourth in the conference in total yards with 954 passing and 477 rushing, complimented by a team-high six rushing touchdowns. Receiver Keir Townsend leads the Trojans with 271 receiving yards, averaging 45.17 yards per-game.

VSU’s ground game is the best in the CIAA, leading with 1785 yards and 20 touchdowns and 255 average yards-per-game. The Trojans also possess the best rushing defense in the conference, averaging just 88.4 ground yards allowed. The defense currently allows the least amount of first downs in the CIAA and is second in the conference for third down stops, only allowing 26.8 percent success. Junior linebacker Lulu Williams leads the defense with 35 total tackles, and sophomore defensive back Na’Shawn Reid-Carlos leads with three interceptions for the season.

Now possessing its first loss in conference and divisional play, VSU dropped from second to third in the division behind VUU. Prior to Saturday, The Trojans hadn’t lost since Week One against Norfolk State. They are nowhere near down and out, though. They will travel to face the winless Lincoln (0-7, 0-4, 0-2) on Saturday, then stay on the road next week for Chowan (1-6, 0-4, 0-2). VSU will end its season with a bang at home against VUU (6-1, 4-0, 2-0) on November 9. But first, they will need some help from their rival this week.

VUU celebrated homecoming with a 41-34 win over Chowan on Saturday, pushing its win-streak to five. Quartback Khalid Morris had a 273-yard, four touchdown day paired with 120 yards and two touchdowns from running back Tabyus Taylor.

VUU displayed its dangerous edge in the victory, a high-powered offense. Morris is the CIAA’s passing leader with 1,547 passing yards, averaging 221 yards-per-game. He currently has 18 passing touchdowns and five interceptions through his seven starts. Wide receiver Charles Hall has nine touchdowns this season and leads all CIAA receivers averaging 26.2 yards-per-catch and 93.6 yards-per-game. The Panthers have hung up 1,702 yards and 19 touchdowns in the air and average 243.1 passing yards-per-game this season, leading the CIAA in all three offensive categories.

Senior defensive back Sterling Hammond leads the team and the conference with 58 total tackles, 40 solo. He also leads the team with two interceptions. Kicker Jefferson Souza seals the three phase attack leading the conference with 13 successful field goals from 14 attempts, averaging over two successful kicks a game. This also makes Souza the leading scorer in the CIAA, averaging 10 points-per-game with 13 field goals and 21 extra points.

The Panthers are ranked 25th in the nation after several weeks of receiving votes. They hold second place in the north, unbeaten in conference and divisional play. VUU’s only loss this season was in the home-opener against seventh ranked Lenoir-Rhyne. The Panthers have some tough competition ahead of them to reach the top. They will travel to  face no. 15 Bowie State (7-0, 4-0, 2-0) this Saturday to fight for first place in the division. They can breathe some hosting Elizabeth City State (2-5, 2-2, 1-1) the following week, but end the season on the road in a rivalry match-up against VSU (5-2, 3-1, 1-1). A win against BSU would put VUU in the driver’s seat, but its road to Salem could still get bumpy afterwards.

BSU fought hard in the 24-14 road win over VSU to keep its undefeated record, extend the win-streak to seven and maintain first place in the division. Quarterback Ja’rome Johnson led in rushing and passing, 182 yards and three touchdowns in the air and 71 yards on the ground.

The Bulldogs have a habit of slower paced first quarter performances, but undoubtedly win games with second half dominance. Through seven games, BSU outscores its opponents 91-14 in the third quarter. It’s an impressive performance increase on both sides of the ball; in the first quarter offense totaled 30 points and defense has allowed 24 points. Johnson has been a surefire dual threat for BSU’s offense. Through the air, he has 799 yards and 12 touchdowns . On the ground, Johnson is fourth in the CIAA with 640 yards and third in rushing touchdowns with six. David is BSU’s top receiver and fourth in the conference with 413 receiving yards, averaging 59 yards per game.

The Bulldogs lead the conference in several defensive categories with 13 interceptions and 24 sacks. They lead the CIAA and are third in the nation on third down stops, only allowing 25 of 101 attempts at .248%. Senior linebacker Anthony Howard leads the defensive pack with 44 total tackles through six games, 32 solo. Redshirt sophomore defensive lineman Joshua Pryor leads the conference with 16 tackles-for-loss, averaging over two per-game. Demetri Morsell and Tevin Singleton both have four interceptions this season, placing first in third respectively in the CIAA.

The Bulldogs moved up to no. 15 in national rankings and remain the only unbeaten HBCU in the country. Most importantly, they have control of the division. Union is breathing right down its neck pending Saturday’s home match-up on Saturday. The teams’ duplicate conference and division record puts a lot at stake for the BSU; a loss will put VUU in first place. Moreover, if BSU wins it has a division game cushion for first place while VSU and VUU would tote a loss in the category. Following this weekend’s high-stake game, BSU will host Lincoln (0-7, 0-4, 0-2) and end the season on the road against Elizabeth City State (2-5, 2-2, 1-1). Given the combined two ins in 14 games of its last two opponents, a BSU win would mean fans could pretty much pack their bags for Salem, VA.

Grambling State legend, Raiders star Willie Brown dead at 78
Stakes are high on the field for Alabama State and AAMU at the Magic City Classic
To Top
X