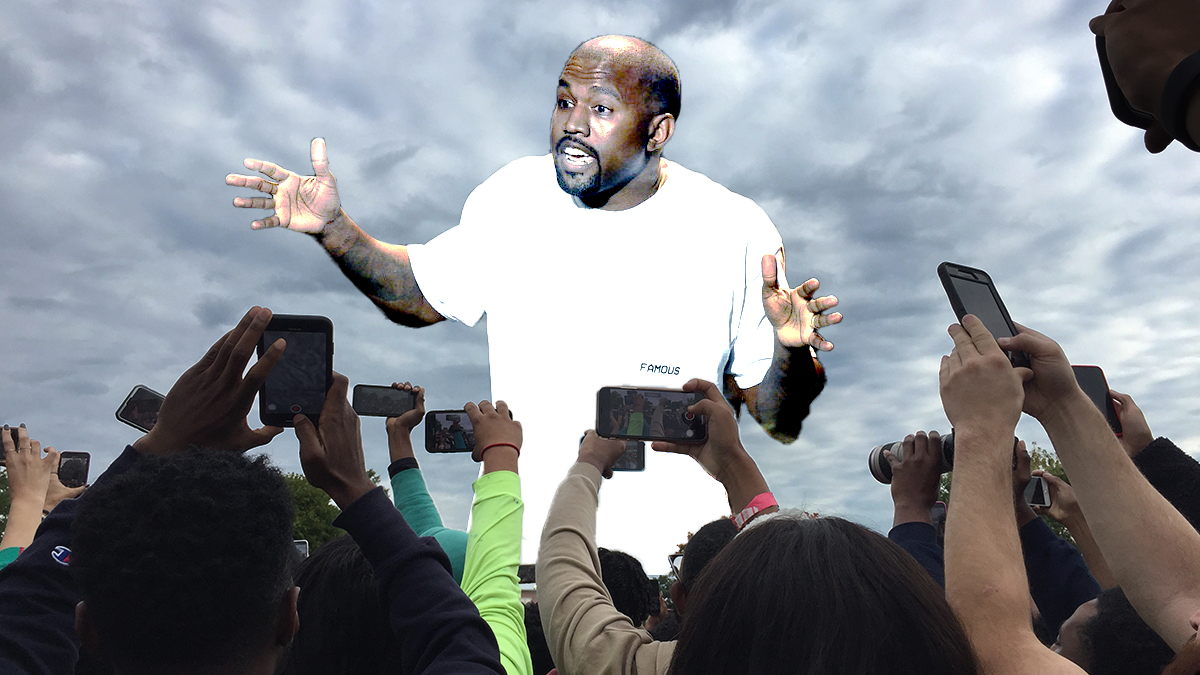 The Gospel According To Kanye West: Live from Howard Homecoming

Kanye West’s “Sunday Service” pulled up to Howard Homecoming on a Saturday morning and it was quite a scene.

This weekend I marked two things off my list I wanted to experience for a long time. Howard Homecoming and witnessing a live Kanye West concert.

HU’s homecoming, it lived up to the hype. Kanye’s appearance on the yard had little hype, (almost NO one knew about it until just before he took to the stage) but the pushback has been swift and heavy.

This wasn’t just any Kanye West performance, this was Sunday Service. A special Saturday/HU Homecoming edition of a series that the producer-turned-rapper-turned-pariah-turned-evangelist has been putting on since earlier this year. West, now a born-again Christian, has been using his music as a way to spread his embracing of Christianity, and also voice his social and political views which is where the controversy really got hot.

HBCU Gameday was in DC as part of the HBCU Tailgate Tour, Driven By Nissan. We hosted a pre-game tailgate show along with Olympic medalist Kelli Wells-Brinkley and Rock-T of the Rickey Smiley Morning Show. We were due to set up at 8 AM, but I caught a few extra minutes of show prep (read: sleep) while Wali Pitt, our resident filmaker Uber’d his way over to Greene Stadium in the lot where the show would be broadcast. About 8:45 I let him know I was on my way, and he responded with a text about them having a Kanye West Sunday Service.

Walking up the hill, there was obviously a choir holding things down while West prepped for the next song. There weren’t nearly as many people as there had been in the same space the day before to witness Da Baby and other acts, but then again this was Saturday at 9:13 AM and reportedly the email didn’t go out to students until 6 AM. Who is checking emails at 6 AM on a Saturday, during Homecoming? I don’t know, but it didn’t take long for the word to spread because by the time I arrived the crowd was already deep enough that the stage was engulfed by onlookers, and anyone less than 6’2 or 6’3 was going to have to fight to actually see Yeezy.

Realizing that I fall a little short of that mark, I decided to just take in the moment. Here were thousands of people, mostly students who were close enough to get up, get fresh and get out quickly enough to be out in the crisp morning air, with their phones held high over their heads trying to record West. West is a 42-year-old icon who has been a giant in the music industry for most of the lives of these Gen-Zers and obviously, the opportunity to see him live for free was something they didn’t want to pass up. And they wanted to make sure it was captured and shared the way the majority of the events of their young lives have been: on the screen of a phone so that they could share it for the world to see.

As I was talking it all in, the first few bars of West’s classic “Jesus Walks” rang through the speakers and that familiar nasal delivery pulsated with it. The song is 15 years old now, which means most of the late 90s/2000s babies on the yard had no recollection of a time when this was not a thing. And, undoubtedly, many of them do not consider themselves Christians and even many of the ones who do claim Christianity likely would not have come for a “Sunday Service” in the traditional sense. But they rapped every word along with West.

Growing up in a church-going household, I wasn’t allowed to listen to rap for early adolescence. I was a senior in high school when the song dropped, but I wasn’t playing any songs I actually liked in front of my mother during the 50 Cent-Dip-Set-Jay Z-Crunk Era. So a song about Jesus walking with me was perfect because even my mother couldn’t argue against that one. Having been a fan since “Through The Wire,” Kanye was an artist I had come of age with. College Dropout dropped when I was picking a college. Late Registration came out when I was going through financial aid blues. Graduation came out at the beginning of the school year I was supposed to graduate from WSSU. 808s and Heartbreak was on point for me personally, at the time. Kanye was one guy in hip-hop I felt like I could really relate to for the first half decade or so of his career.

As all of this played through my head I began to walk the peremiter of the crowd to gather footage and to get closer to the tailgate tour.

It was about this time that West transitioned from the song to his personal testimony. He talked about how giving his life to God helped him when he had lost his mind. The crowd was generally supportive and receptive to his message.

Then West started talking about racism, slavery and incarceration and the like. Complete with bad statistics about how one out of every three African-Americans is incarcerated. Of course that’s nowhere near true, and pretty much everyone in earshot knew it. There were a few vocal rebukes, but most of them stayed amongst small groups and weren’t strong enough to shut things down.

Over the last year, West has made questionable to flat-out wrong statements about slavery, black heroes and racisim, as well as aligned himself with Donald Trump’s “Make America Great Again” logic which is as anti-black as it can get. At the same time, he spoke of the divsions within Christianity that keep color lines among that faith, and his decision to speak out on that while sharing what he deems as “The Good News.”

Overall, the transcendent power of West’s music wasn’t erased by his politics, but it was muted. Love him or hate him, West has never been afraid to speak his mind and bare his soul to the world. On Saturday he appeared to be a man standing up and giving his testimony to any and all who will listen while sharing his understanding of the gospel. He’s got that right within his religion, but obviously he still has some growth to do, as do many of us within the faith.

I haven’t attended church regularly in five years, but I attended Sunday Service (albeit late) thanks to the star power of Kanye West. If his “Sunday Service” is an attempt to gather people in a sense of unity and community built around his musical talents, then his new-school crusades may have a future. But just like any man (or woman) of the cloth, he needs to find sound doctrine, spiritually and politically, or prepare to be rebuked.

His politics, unquestionably need work. There are plenty of good pieces on that, and that’s not why I wrote this. In terms of the authenticity of his newfound religious fervor, I’m not willing to judge lest I be judged and I have no stones to cast.

The Gospel of Kanye West is fervent, it is erratic and it is controversial. It’s follower count is high, but its conversion rate will likely remain low, especially with an educated group like the one at Howard. I think most people left with a phone full of videos and pics of other people’s phones and let West’s political message fall on rocky ground as they went on about their homecoming experience.

The Gospel According To Kanye West: Live from Howard Homecoming