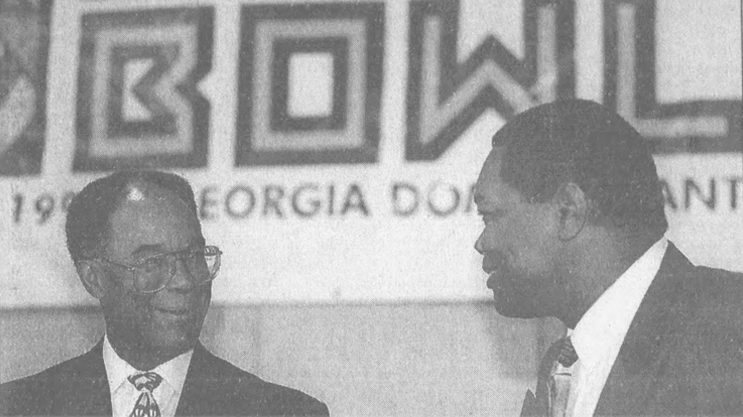 Some of the greatest coaches in black college football history have coached at Florida A&M and Southern University.

The FAMU-Southern (or Southern-FAMU, depending on who you rep) rivalry goes all the way back to the 1940s. While schools like LSU and Florida were lily white, these programs were flushed with the same types of athletes that now permeate these two SEC powers as well as the rest of black college football.

Players aside, though, this historic rivalry has been at its best when both its programs were strong and coached by Hall of Fame coaches.

Southern’s football legacy begins with Ace W. Mumford, the man whom its stadium is named to this very day. The Wilberforce grad turned SU into a perennial power in the SWAC in the 1940s after private schools like Bishop and Wiley College ran things in the conference’s early years. Mumford won six black college national titles, including five at Southern from 1948 through 1960.

Shortly after Mumford took over in Baton Rouge, former Knoxville star Jake Gaither accepted an assistant coaching position at Florida Agricultural and Mechanical College for Negroes (FAMC) under William Bell. Bell was the first black football player at Ohio State back in the 1920s, and he also helped turn North Carolina A&T into a national power. Bell was building a powerhouse program as his teams went 17-1 his final two seasons before World War II interrupted that. Gaither took over and dominated the SIAC and black college football for a quarter century.

The two teams first met on the football field in 1941, and the series was a constant one despite the teams being in different conferences as FAMU maintained its status as an SIAC school but pretty much pulled a Notre Dame and scheduled whoever the hell it wanted to for decades. The series remained competitive until Mumford’s death at a track meet in 1962.

“From the very beginning of the series until Mumford’s death, these grid classics were marked by spectacular and vicious play,” wrote famed journalist and pro football scout Bill Nunn Sr. in the Pittsburgh Courier in May 1962.

Southern and FAMU continued to play each other consistently throughout the following decades, but after Mumford’s death Southern started taking a backseat to Grambling on the football field. Florida A&M remained strong through the end of the Gaither Era and through the Rudy Hubbard years, but things weren’t quite the same.

Cut From The Same Cloth

Back in the mid-1990s, just one year apart, two of the best coaches in black college football took separate steps forward by taking over once-proud HBCUs that had fallen from their respective perches. In many ways, their stories were mirror images.

Both men were among the first generation of black men to compete athletically at Predominately White Institutions, first Billy Joe at Villanova and then Pete Richardson at the University of Dayton. Both would go on to play in the pro football in the 1960s. Joe played seven years in the AFL/NFL with four teams, winning a Super Bowl ring in 1969 with Broadway Joe Namath while Richardson played three seasons with the Buffalo Bills during the OJ Simpson Era.

Despite their PWI and pro football pedigree, it was historically black colleges and universities that offered them their first taste of college coaching. Joe started as an assistant at Cheyney State in Pennsylvania, spent one year in the ACC at Maryland and then headed back to Cheyney where he led the nation’s oldest HBCU to a solid, but unspectacular 31-32 record before leading to take on the job of running backs coach with the Philadelphia Eagles. He spent a couple years in Philly, helping the Eagles win the NFC title and advance to the Super Bowl in 1980.

About the time Joe was leaving Cheyney, Richardson took a leap of faith and left the high school ranks in Ohio to join Bill Hayes’ staff at Winston-Salem State University. Richardson helped coach Timmy Newsome into an NFL Draft pick in 1979 and helped the Rams stockpile talent that made it a near automatic contender for the CIAA crown year-after-year in the 1980s.

Meanwhile, Joe decided he wanted to become a head coach again and began looking for jobs. Despite his pro football pedigree and success as a coach, he found his options were limited.

He took over as head coach of Central State University, a DII independent HBCU that had considered cutting its football program all together. CSU went 11-11 in Joe’s first two years as he began collecting players who had the talent if not necessarily the grades to play elsewhere. Fitting a program whose mascot is the Marauders, Joe’s squad was Last Chance U. nearly 30 years before that became a thing. Joe’s method worked, however, as he led CSU to a 12-1 record in 1983 with a D2 national title appearance.

For the next decade, Central State never lost more than three games in a season and won at least 10 games in seven of those. CSU went from being a doormat to winning five consecutive national black college football championships with talent like Vince Buck, Erik Williams and Hugh Douglas. At its height in the early 1990s when it won two NAIA titles (1990 and 1992) CSU could and did blow out many teams on the regular, including MEAC and SWAC squads. In fact, his 1986 CSU squad pounded FAMU 41-6 in the Circle City Classic.

Down in Winston-Salem, after serving as Hayes’ top assistant and recruiter for nearly a decade, Richardson was now officially in charge. Hayes’ departure for North Carolina A&T following the 1987 season put him in the drivers seat and he was more than ready to fill those shoes. Richardson led the Rams to the 1988 CIAA title and back-to-back titles in 1990 and 1991 while churning out NFL talent like Yancey Thigpen and several others, going 41-14-1 during his tenure there.

By 1992, Southern University football was in need of some fresh blood. Despite being in the football hotbed of Louisiana, SU was considered more of a basketball school as Ben Jobe’s Jags were routinely putting up triple-digits on the court. The football field was another story, however, as it had been nearly 35 years since they had won an outright title in North Baton Rouge.

This was not lost on Richardson when he took the job following the 1992 season.

“Unfortunately for the fans, in the last few years, they haven’t been quite successful,” Richardson said. “The thing that we’re trying to instill in them is consistency on both sides of the ball, and being fundamentally sound on what they’re doing. I think you’re going to have to instill that winning attitude in the players.”

And that’s just what Richardson did. He inherited a 5-6 team and immediately went to work building an offense around sophomore quarterback Eric Randall. The team went 11-1, winning the SWAC title with a solid win over archrival Southern in the Bayou Classic and claiming the Black College Football national title after beating South Carolina State in the Heritage Bowl. After going 34 years and 11 head coaches without a title of its own, SU was back.

Joe Brings His Talents To Tally

Like its long-time rival, Florida A&M’s football program had fallen on hard times too in the 1990s. Since winning the 1978 Division I-AA title, FAMU had spent the last decade-and-a-half in medorcrity by its lofty standards. It hadn’t won more than eight games since the national title season and had just one MEAC title to show for it.

Joe, meanwhile, had accomplished pretty much every thing he could in Ohio. Central State had been fortunate to keep him for a dozen years, but fate came calling and Joe picked up the phone and headed to Tallahassee in December 1993.

FAMU didn’t pull an SU and win the MEAC title in Joe’s first season, 1994, but it did go in to Baton Rouge and beat SU on its homecoming 16-14. By the next season, though, Joe’s squad was running through the MEAC unblemished and ranked first in black college football in early November of that year. Richardson’s SU squad, after falling back in 1994, was ranked second.

The two schools were scheduled to meet in Atlanta at the Georgia Dome in a game billed as “The Super Showdown.” It would be the first of two games in two months for the rivals as both looked to set the tone for the next half-decade in both the MEAC and SWAC.