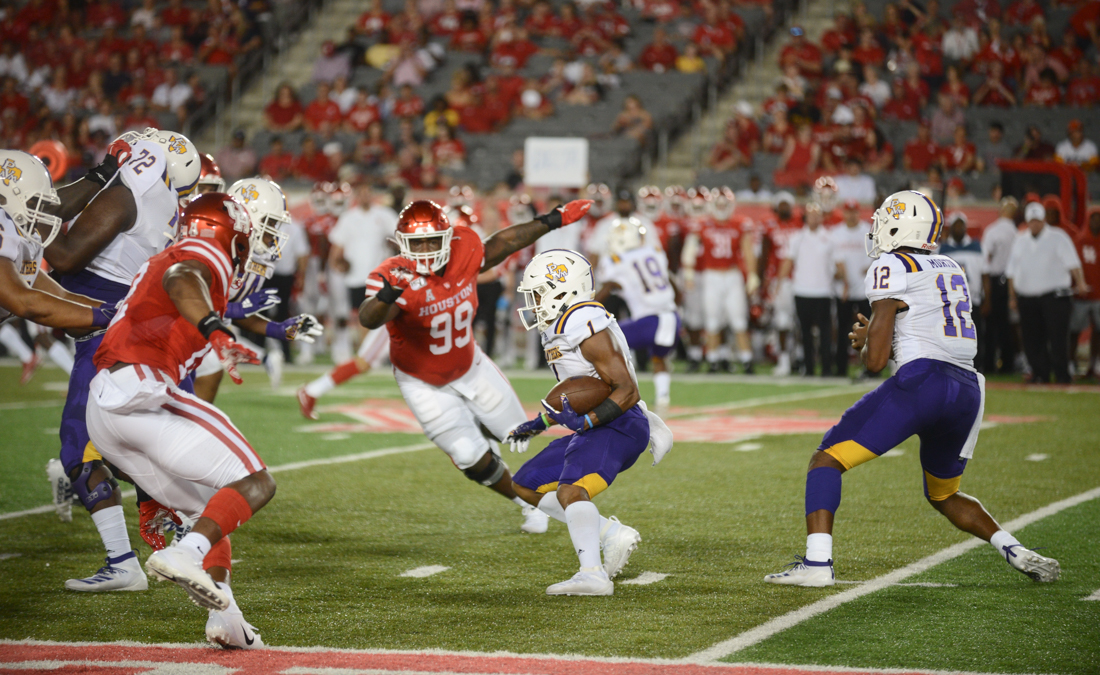 HOUSTON – An early first-quarter deficit was too much to overcome for the Prairie View A&M football team, who fell 37-17 to Houston Saturday evening at TDECU Stadium.

Though the Panthers (1-1) limited Houston to a field goal on its opening possession, their first crack at the Cougars’ defense resulted in a three-and-out. An off-target punt ultimately gifted Houston prime starting field position in the form of the Panthers’ 28-yard line. Two plays later, Kyle Porter scored from 20 yards out, and following the extra point, Houston led 10-0 with 9:19 left in the first.

Senior quarterback Jalen Morton led the offense deep into Cougar territory on the Panthers next drive, doing it with his arm and his legs. After a 14-yard quarterback keeper put Prairie View A&M on Houston’s side of the field, Morton later found junior wide receiver Tristen Wallace for a 27-yard pitch and catch to move the Panthers to the Cougars’ 5-yard line. Though the drive stalled, junior kicker Zach Elder booted a 23-yard chip shot to get Prairie View A&M on the board, capping an eight-play, 59-yard drive.

Houston responded with a seven-play, 65-yard drive capped by a D’Eriq King 1-yard scoring plunge, and after a Prairie View A&M punt, King hit Keith Corbin on a 21-yard touchdown pass to close out a five-play, 40-yard drive late in the first. All told, Houston led 24-3 at the end of the first quarter.

The Cougars increased their lead to 31-3 after King scored on an 18-yard run to end a nine-play, 53-yard drive. The Panthers’ defense was then forced to defend a short field after a blocked punt allowed Houston to set up shop just outside the Prairie View A&M red zone.

The Panthers were up to the challenge on not one, but two occasions, as Prairie View A&M forced Houston to settle for a 41-yard field goal that was wiped away with a Panther personal foul penalty. Undeterred, the Panthers’ defense stood strong again, as the Cougars came away with just a 22-yard field goal to make it 34-3.

Prairie View A&M showed some life on the next drive, as sophomore signal-caller Trazon Connley came on to provide an offensive spark. With early success on the ground, Connley eventually orchestrated a 16-play, 85-yard march to the end zone, capping off matters with a 16-yard touchdown toss to Wallace just before half.

The Panthers defense held Houston to three points the rest of the way, but the early hole was ultimately too much to climb out of as a potential 77-yard punt return touchdown by Dawonya Tucker was called back due to a penalty, and a 54-yard touchdown strike from PVAMU junior quarterback T.J. Starks to sophomore running back Kristian Mosley late in the game proved too little, too late.