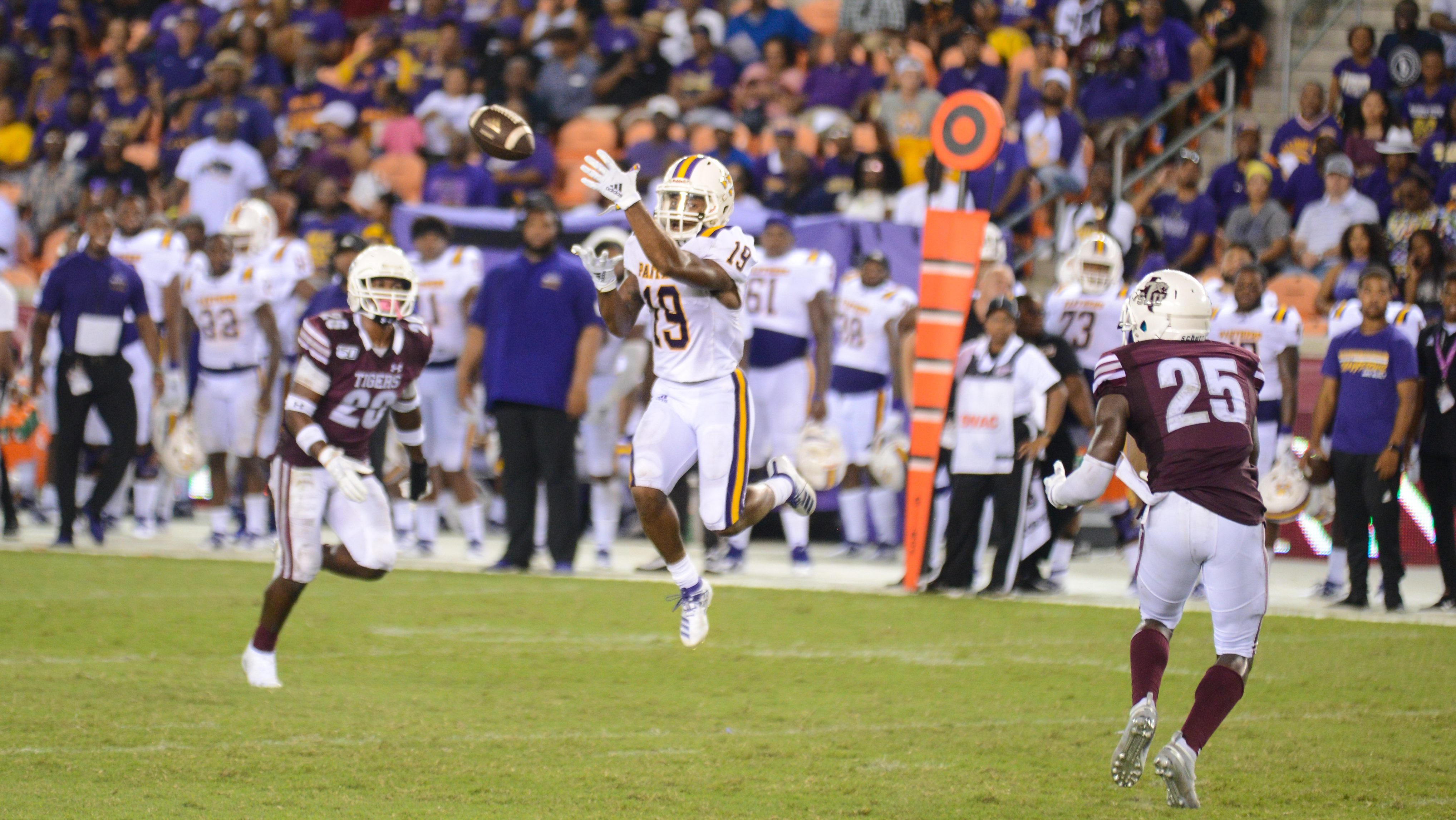 Dating back to 2004, the Panthers have won 13 of the last 16 meetings between the teams.

“I thought the fans showed a lot of support on both sides. I thought it was an excellent game,” PVAMU head coach Eric Dooley said. “We knew we were going to have a hard-fought battle, but we just had to continue to execute in all three phases of the game and play for 60 minutes. I thought we did a great job at that in phases, but there’s still some work to do and we understand that. There are some things we just have to go back to the drawing board and correct, but it’s easier to correct things after a win.”

However,  it wasn’t all smooth sailing, as Texas Southern (0-1, 0-1 SWAC) got the early advantage with a strong first quarter of play punctuated by a DeAndre Johnson scoring strike to Tren’Davian Dixson from 12 yards out with 13 seconds left in the first quarter to give the Tigers a 13-6 lead going into the second quarter.

“We want to be known as a big play team. We want to strike fast and strike big,” Dooley said. “I want to take my hat off to Texas Southern as they did some things that stopped us for a couple of series. But, you know, my hat’s off to my team as well. They fought back because we understand that we have to fight for 60 minutes.”

The Panthers shook off the slow start and ultimately overran their bitter rivals in the second quarter, where Tucker slashed through the Tigers’ defense for a 17-yard score to help tie the contest before breaking it open with a 66-yard scamper to the endzone. Junior kicker Zach Elder added a 23-yard field goal to make it 23-13 Panthers going into the break.

“We had it in our mind that we could put ourselves in the driver’s seat in the conference (with a win),” Tucker said. “So we came out with a killer mentality. We wanted to go out there and destroy them and just win. We had some jitters at the beginning of the game, but once that went away, everybody clicked on all cylinders. We’ve got a couple mistakes that we’ve got to fix up as coach Dooley said, but once we do that, we’ll get it going.”

The Panthers’ dynamo did exactly that, needing just 11 totes to end the night with 190 rushing yards and three scores.

“I looked at it like this: It’s my last Labor Day Classic, I’ve got to go out with a bang,” Tucker said.

Morton put the game effectively out of reach for Texas Southern when he found junior wide receiver Kalen Riles for a 10-yard score five minutes into the third quarter. Though the Tigers inched closer, a fourth-quarter score ensured victory for the Panthers.

“We’re an attacking football team,” Dooley said. “We’re not going to lay back and wait, because time waits on no one.  We just wanted to go out and attack, and do what we do best, which is executing in all three phases. Offensively, we wanted to have the mindset to try and control the clock as well as the scoreboard.”

On the night, Morton threw for 350 yards and a pair of touchdowns. Junior wide receiver Tony Mullins was the recipient of Morton’s other scoring strike and ended the night with six grabs for 141 yards. Defensively, junior linebacker Tre’Shaud Smith led the Panthers with 12 stops (eight solo).

“We felt confident enough that all we had to do was go make plays and do what we do,” the signal-caller said. “You get anybody in our offense the ball, we’re play makers. At the end of the day, my great wall (the offensive line) is the start. I call them the great wall for a reason, and they’re the playmakers before any of us.”

Johnson was a bright spot for the Tigers, throwing for 259 yards and two touchdowns to one interception.

With the season’s first triumph under its belt and a leg up on the field in the conference race, Prairie View A&M turns its attention to another in-state foe. This one will be a trip out of conference to take on the University of Houston.

Though a comfortable win as far as the scoreboard reads, Dooley and the Panthers aren’t planning to rest on the spoils of victory.

“Let me make it perfectly clear: we strive for perfection,” Dooley said. “That’s what we want to do. We know that’s not the case, but that’s what we’ve got to strive for. We’re going to clean it up, and there’s some things we need to look at. I’m still going to take my time and look at the film to see what things we need to correct to get better, because week two is going to be a big week for us.”