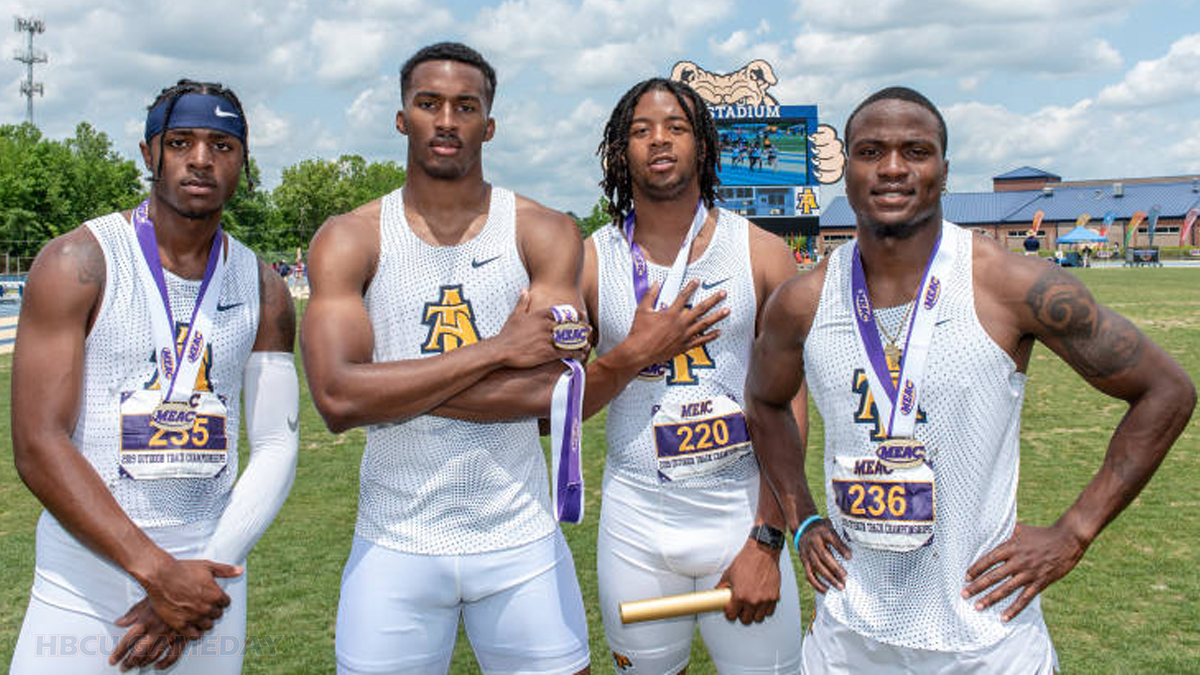 Not one, not two but three NCAT sprinters are headed to the 2019 World Championships.

DES MOINE, IOWA (July 29, 2019) – There is no need to ask the question anymore. Yes, North Carolina A&T needs to be mentioned when discussing the best track and field programs in the country.

They proved it again at the 2019 USATF World Championships at Drake Stadium on the campus of Drake University.

Thanks to impressive showings, there will be three Aggies on the U.S. track and field national team when some better-resourced programs across the country cannot boast of one. Former N.C. A&T track and field stars Rodney Rowe and Chris Belcher are on the team along with current Aggie standout Trevor Stewart. In addition, former Aggie hurdler Michael Dickson put together the two best performances of his life over the weekend.

“We’re only doing what we have been doing all season – training smart, training hard and believing that we are among the best in the world,” said Ross. “I’m happy for all our athletes that competed here. They showed the world that A&T is and will continue to be one of the best track and field programs in the country.”

Belcher was the first to make the national team on Friday. He ran a 10.12 in the 100-meter final to finish third becoming an automatic qualifier. Stewart, who finished second in the nation in the men’s 400m over the spring, will compete for the U.S. at the IAAF World Championships in the 4×400-meter relay.

On Sunday, it was Rowe’s turn. Rowe will be a member of the team as a 200m runner. Rowe made the 200m final at USATF by running a qualifying time of 20.59. Rowe then finished seventh in the final in 20.75. Rowe needed to finish in the top-3 in order to be an automatic qualifier for the national team.

However, since some of the other athletes competing did not have the qualifying standard between January 1, 2018-July 21, 2019, Rowe will make the world championship team.

Meanwhile, Dickson abolished his personal record twice on Sunday in the men’s 110-meter hurdles. Dickson blew away his previous PR of 13.65 by running a 13.47 in the semifinals to qualify for the finals. Dickson’s time was the fourth-fastest qualifying time. In the final, Dickson again lowered his PR by finishing in 13.45.

His fifth-place finish, however, was not enough to place him on the U.S. team. “Michael has had the potential all along to be one of the best,” said Ross. “Tonight, he proved it.”

Rowe finished his career with 11 MEAC titles including a four-year claim on the 4×100-meter relay gold medal. He won the outdoor and indoor 200m titles two times apiece and he has a 60m, 100m and 4×400 relay title in the MEAC. Rowe is also a two-time first-team All-American in the 4×100 and he has a first-team All-American accolade in the outdoor 200m.

Stewart, a rising senior at N.C. A&T, is considered one of the favorites to win an NCAA national title in 2020. In 2019, Stewart’s 44.38 ran in the 400m at the MEAC Outdoor Track and Field Championships at N.C. A&T’s Irwin Belk Track made headlines because at the time it was the 14th-fastest time in world history. Stewart went on to finish second nationally in the 400m with his 44.25 time.

In his career, Stewart has claimed four MEAC championships with two 4×400 relay indoor titles, one 4×400 relay outdoor title and one 400m title.