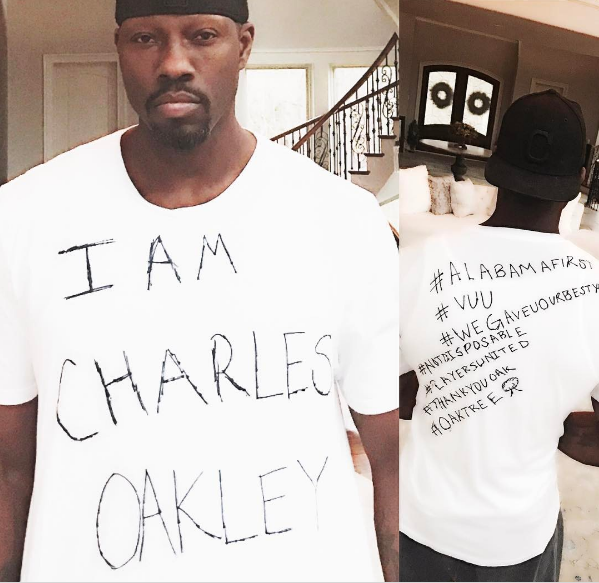 Charles Oakley may not ever be able to set foot in Madison Square Garden again, but he’ll always have a friend in Ben Wallace. The four-time NBA Defensive Player of the Year came to the defense of his mentor and fellow Virginia Union alumnus on Friday night.

Wallace, who does not do social media, posed in shirt with scribbled messages to his mentor on his wife Chanda’s Instagram on Friday. This comes days after Oakley was removed from and arrested at Madison Square Garden following an altercation that involved Knicks owner James Dolan. He has be banned, according to Dolan.

His wife posted a message thanking Oakley for taking interest a 15-year-old Ben in Alabama during a basketball camp. That would eventually lead to Wallace attending Oakley’s alma mater a decade later before embarking on an NBA career that has him up for the Basketball Hall of Fame.

If you know Ben Wallace, then you know that he does NOT do social media. So for him to have his wife post this on Instagram is big. #Oakley pic.twitter.com/PNOrC1wM1t

“The bond made there has continued for almost three decades. We thank you oak for all you did for us and Ben knows that if you hadn’t taken an interest in that scrappy kid back then, he could have slipped through the cracks.”

Wallace isn’t the only former VUU star and NBA player to show support for Oakley, who was picked in the first round by the Chicago Bulls after helping the team go 31-1 as a senior. Former NCAA D2 Player of the Year A.J. English also showed his support for Oakley on his Facebook page.

They really don’t understand what they did when they messed what this dude! My Brother is one of the realest dudes that not only the NBA produced but Life in general. They don’t make them like Oak anymore a cat that truly is his Brothers Keeper! You never have to worry about having a conversation with him and then he runs to someone else and repeat or talk about what was said in confidence. If he has something to say to you ( good or bad) believe me he’ll tell you hisself. The League picked the right one to start a fight with because Oak is not Having it!

Hopefully the Knicks and Oakley can work things out sooner rather than later.