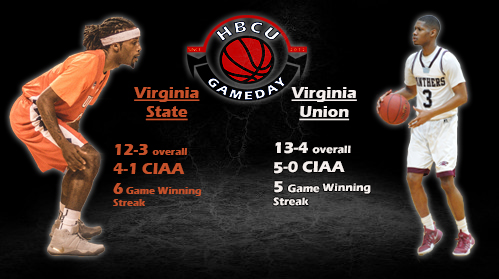 This I-95 rivalry guarantees: Mascots will give the dance battle of their lives, cheerleaders will produce the next installment of Bring it On, alumni will arrive in packs with school apparel down to the socks, the bands will hold nothing back, and you will witness the best of the best in D2 CIAA men’s basketball when Virginia Union and Virginia State face off in the Freedom Classic on Sunday, January 15th. Tip-off is slated for 7 P.M.

Both VSU and VUU enter the matchup as leading contenders for the hardware this February at the CIAA Tournament.

The Trojans enter the contest on a six game winning streak, currently 12-3 overall and 4-1 in the CIAA. The Panthers enter the matchup on a five game winning streak with a 13-4 overall record and a perfect 5-0 conference record. They also have a tendency to live on the edge. They won three games by a combined four points in the span of six days in early January.

“There’s nothing like getting real in game last minute shots and defensive stops to help win games,” Butler. “Hopefully we can be prepared for this type of situation around CIAA Tournament time.”

As reigning CIAA champions VSU is expected to put up a good fight against any opponent in their efforts to repeat. VSU came into the season predicted to finish first in the conference, but VUU was thought to be right on its heels, seeded second overall and in the North Division.

Both teams suffered unexpected losses at the mercy of two Southern Division teams last month. VUU fell 87-73 to Winston-Salem State thanks to a big game by Willie Crandell. Luckily for VUU, the matchup served as a non-conference game and they remain undefeated in conference play.

Saint Augustine’s upset VSU 64-58 on Dec. 13 for its only conference blemish so far.

Junior Richard Granberry is a fresh face in the Trojans starting lineup that has proven he can be explosive night after night on both ends. Granberry is a disaster waiting to happen in the paint for any opponent. His size (6-8, 220 pounds) and ability to score (14.6 ppg) inside keeps the game exciting and will likely keep Tavon Mealy’s hands full.

VSU has a veteran roster with at least three players worthy of All-CIAA consideration in Granberry, Elijah Moore, and Kevin Williams. Combined, the two teams currently house five of the top 20 scorers in conference standings. VUU’s  Ray Anderson leads the CIAA in scoring averaging 18.5 ppg, and he’s also third in assists, and fourth in steals.

“Ray is a really good player,” VSU coach Lonnie Blow Jr. said. “We have to do a good job guarding him by making him work hard for his points, but they have other capable scorers who we need to focus on containing as well.”

The two teams split last season’s series, but it was the Panthers that took home the Freedom Classic bragging rights, handing the Trojans their first conference loss of the season. The Panthers hadn’t won the classic since 2012 when they ruled the Trojans and held a 23 game win streak in the rivalry going back to 2002.

The Trojans will look to be aggressive early, control the tempo, get the ball in the hands of their bigs. Defensively, look for them to play their trademark man-to-man defense we’ve grown to expect. They have struggled at the line this season so that will definitely be something to keep a watchful eye on in a matchup of this caliber.

Meanwhile, the Panthers plan to keep the game exciting as they have done in the past weeks, keep their role players involved, stop the Trojans defensively, and close out the game.