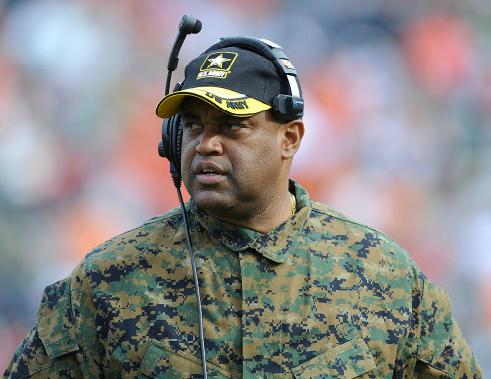 For the most part, Mike London’s introductory press conference was what you want for a new head football coach at one of the nation’s most esteemed institutions.

The new Howard coach talked about building a winner on the field and off of it. He talked about building on the strengths of the program. He talked about going to class and showing class. And you could almost hear a collective “amen” among the long-suffering alumni and supporters of Howard football in the DMV and across the world. Especially coming from the lips of a man with FBS experience and not some “HBCU retread” (words from fans, not mine).

But near the end of his nearly 11 minute introductory speech, London went in a direction that he may not have even realized he was going.

“Treating people with dignity and respect is one of the tenants you can look to go other places. It’s one of the tenants that says, ‘hey, that’s what you’re supposed to do.’ Open a door. Say thank you, say please. Pull your pants up. Comb your hair. Those things like that. We tend to sometimes overlook the things that are important, but we will be those things. We will do those things, men. Because they are important.

“Pull your pants up. Comb your hair.”

The words grew more jarring the more I thought about them.

London was a police officer in Richmond, VA in the 1980s before deciding to go into coaching. I figured, hey, maybe this is just his MO. Maybe he’s just Team Pull Up Your Pants. He’s a 56-year-old Baby Boomer—a father of seven, no less.

He also talked about showing dignity and respect. But there was no reference to pulling up pants or combing hair. Not one. Read for yourself.

Howard football has had its share of shortcomings over the years, but that has been more of a winning problem than an image problem. For 150 years now, this intuition has produced some of the best and brightest young men around.

So why would London feel the need to talk about appearances with Howard when he didn’t at UVa eight years ago? Would properly coiffed players have been the missing link to a more successful tenure in Charlottesville?

Speaking of his tenure at UVA, London did have one fashion statement himself that rubbed some the wrong way. While coaching in Charlottesville, London, who did not serve in the military, wore full-camouflage fatigues during a game against Miami. While he may have thought it was creative, it rubbed some veterans the wrong way.

I can’t imagine that Coach London was trying to portray himself as a crazed person, dressed in a quasi-military uniform, flailing about and screaming at authority figures (i.e., the officials) — but that’s sure how it came across. If someone was flipping through channels and saw him, they might have thought there was a crazy “soldier” on the field and assumed it was someone who actually had the right to wear the uniform. … Is it too much to ask to show a little decorum while wearing a uniform (incorrectly, mind you) in which you’re trying to “appreciate” those who wear it for a living? … I see it as a little insulting.

That was written by an active duty member of the military. Respect and dignity, right?

I’m not here to judge Mike London. I’ve never met the man at this point , which will probably change as soon as football season gets closer. But I would ask that Mike London not pre-judge the young men he has inherited at Howard University. By all accounts, the young men that Gary Harrell brought into the program can dress and style themselves, they just need a football coach who can take care of the rest.

London is not new to coaching, but he is new to coaching at an HBCU. We are fiercely protective of our schools, but we must also be fiercely protective of the student-athletes that represent them. The young men he has been entrusted with have come of age in a world where they’ve been told that wearing a hoody, or listening to loud music is an offense punishable by or up to homicide. The last thing they need to do is be publicly made an example of by a coach they just met.

It’s one thing to tell your team, in private, that appearance matters. It’s another to make that statement in front of a room full of supporters before you’ve likely even met your entire new team.

Hopefully London will spend more time coaching his players and building up his program than being the fashion police.