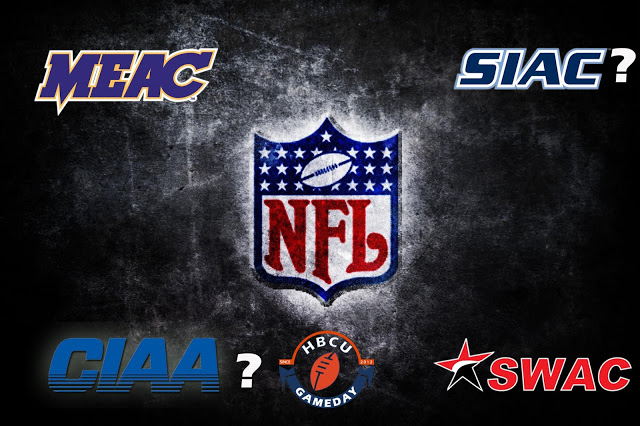 This weekend’s Celebration Bowl marked the end of the HBCU football season, but the start of a new relationship. The NFL teamed up with two of the four NCAA HBCU conferences, the MEAC and SWAC, for a careers forum in Atlanta as part of a previously announced forum.

And apparently they aren’t done. The NFL announced on Monday that it will honor the 29 Hall of Famers that attended HBCUs in a pre-game ceremony prior to Super Bowl LI.

While that is awesome news, as an advocate for all HBCUs, this partnership does give me cause for concern.

It appears that the two oldest HBCU conferences, the CIAA and the SIAC, are being left out in the cold while the other two conferences are reaping the benefits and being recognized as the sole proprietors in an enterprise in which they are just two pieces of the puzzle.

This isn’t the first time I’ve felt this way. It probably occurred during the 2014 MEAC Basketball Tournament when I noticed a full-sized frame recognizing MEAC players/alumni in the NFL Hall of Fame. As a student of history, I had to go check it our for myself.

So you can imagine my reaction when I realized that out of all the dozen or so players on the board, exactly one player actually competed in the Mid-Eastern Athletic Conference. Just one. Harry Carson of South Carolina State, who went on to have an excellent career with the New York Giants, played in the conference from 1972-1975.

The MEAC was formed in 1969, established in 1970, and began play in 1971. Before that, six of the original members played in the CIAA, while South Carolina State spent much of its time in the SIAC. So, while the MEAC claims Morgan State’s LeRoy Kelly as part of its Hall of Fame legacy, he actually competed in the CIAA. Same goes for “Bullet” Bob Hayes, who competed in the SIAC as a college athlete. Elvin Bethea (A&T), Willie Lanier (Morgan State) and Shannon Sharpe (Savannah State) are among the others whose schools are now in the MEAC but played in other conferences.

It’s basically like the ACC claiming Jim Brown on an ACC roster of Pro Football Hall of Famers simply because Syracuse joined the ACC a few years ago.

As for the new careers initiative, I can’t imagine the SIAC and CIAA turning down an opportunity to have its students involved in such a potentially powerful program. These conferences include some of the oldest and most academic rich institutions of any HBCUs, including Tuskegee, Morehouse, Lincoln University and others. Students at those HBCUs could definitely benefit from  the opportunties that now currently exist exclusively to schools in the MEAC and SWAC.

We live in a world that priorities the large over the small. I get it. And few places is that gap as big as in the sports world, where ESPN and others routinely cover the biggest schools, and only comes knocking to the smaller ones when it smells a big story. But that’s why HBCUs as a whole often find themselves struggling  for coverage.

This partnership is a great thing and will be great for both conferences and the NFL. The conferences can boast that they are providing off-the-field opportunities for students and the NFL can brag about what it is doing to help HBCUs. But as long as the CIAA and SIAC are left in the background or out of the picture completely, it’s hard to truly celebrate this partnership to the fullest for those who want HBCUs as a whole to win.