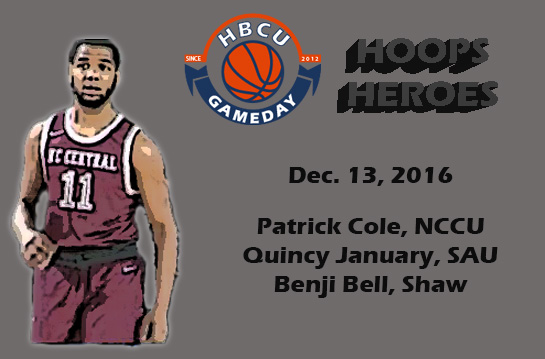 North Carolina Central nearly pulled off its second SEC upset in two weeks on Tuesday night. NCCU fell 70-66 to LSU after leading by as many as 13 points in the first half.

Pat Cole, already a three-time MEAC, finished just shy of recording his second triple-double of the season. Cole scored 19 points, grabbed 10 rebounds and had nine assists in the loss. He also had 10 turnovers.

Quincy January is the reigning CIAA Defensive Player of The Year, but the St. Aug big man found his offensive touch on Tuesday. January came up with 24 points and 11 rebounds as SAU handed Virginia State a 64-58 win in its CIAA opener.

Benji Bell was clutch down the stretch for Shaw, scoring seven of his 28 points in the final 2:23 of his team’s 71-68 win over Elizabeth City State.

Highlight of The Night

Well, you saw it. Derrick Griffin is just a grown ass man for Texas Southern.