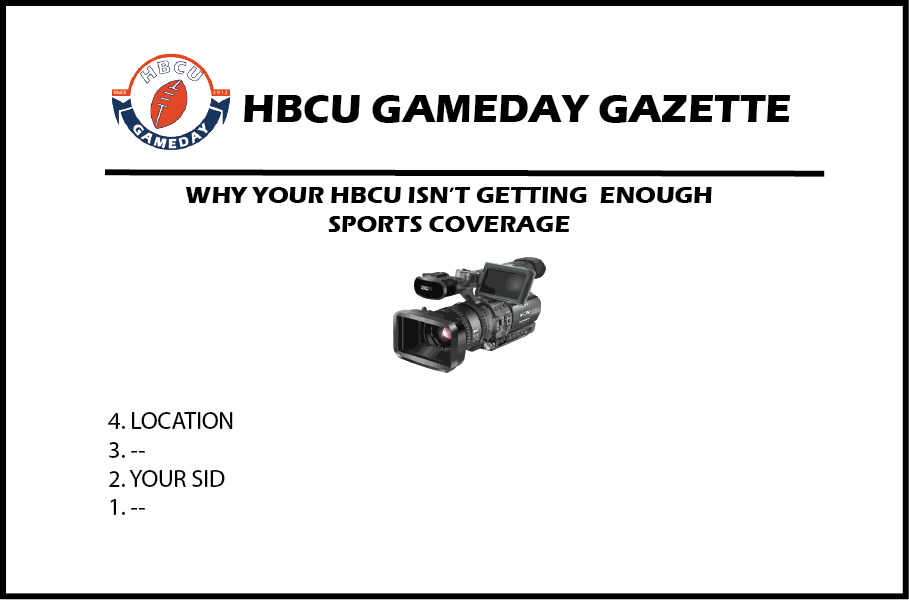 The struggle to get widespread media coverage has been a major thorn in the side of HBCU athletic departments for more than a century. Initially ignored by the mainstream media during the Jim Crow Era, HBCUs have always been able to count on the black press for coverage. But of course, in this day and age, all media coverage is important.

Here at HBCU Gameday, we pay close attention to the relationship to HBCU athletics and the media. Here are some of the obstacles and problems we

5. You Aren’t In The Right Place

Some HBCUs are located in places with a relatively small media presence. Others are located in media meccas like Washington, D.C. or Atlanta, but have to compete with professional and major college teams, and often find themselves overlooked. Both situations require sports information directors, which we will talk about at length, to build relationships with local media using creative pitches and good, old-fashioned conversation to help overcome something that they can’t technically change.

The HBCU athletic departments that get most frequent, in-depth coverage are often located in medium-sized media markets. The Tallahassee Democrats’ coverage of FAMU, the Winston-Salem Journal’s WSSU coverage and the Baton Rouge Advocate’s coverage of Southern are examples of solid and consistent HBCU coverage from mainstream sources.

4. Your Website Is Doing Too Much (Or Not Enough)

Journalists are no different than the rest of the world when it comes to our jobs. We want to get our work done as easily and efficiently as possible, and the easiest way to accomplish that is often through the athletic department’s website. Unfortunately, many websites for HBCU sports programs are either cluttered, unkept, or look like they were created on AOL.com back during the Windows 95 Era.

Stretched photos. Hard-to-read fonts. Dead links. We won’t name any names, but you can look at your school’s website and know whether it is easy to navigate and informative, or it’s just getting by. Most schools use one of a few companies, but some maximize what they have while others don’t seem to take it seriously. It’s 2016 and we shouldn’t have to say this, but your website is a direct reflection of your athletic department.

Social media is a relatively new part of media presence, but it’s an increasingly vital part. Social media offers athletic departments a chance to control the message and be their own producer of content that shines a light on their institution and its student-athletes.

Fans who can’t get to games need to feel engaged, or at least informed, as much as possible. One of the easiest ways of doing this is by tweeting score updates during the game and posting the final scores after the game is completed. Sounds simple, right? Well depending on which school/conference you follow, you know that’s not always the case.

But of course, as we near 2017, just tweeting scores isn’t enough. Highlights and fan interaction are critical as well to growing your following. HBCU Gameday wouldn’t be where it is without it and surely HBCU athletic departments would benefit from maximizing their audience. A consistent stream of meaningful info as well as well as a laugh here and there goes a long way. North Carolina Central, Bethune-Cookman and Fayetteville State are just a few HBCUs who do a good job of disseminating information and giving a little bit of personality.

You don’t have to know much about media to know that sports information is vital to getting coverage for your athletic program. SIDs, sports information directors, are the gatekeepers of access for the media. They credential reporters. They usually oversee the website and social media accounts. They pitch stories to local media that help bring a positive light and create brand awareness.

Unfortunately, many SID staffs are lacking in bodies and resources. This isn’t new, though, as it’s always been a struggle for HBCUs.

“The image of sports information among many people at Howard is it’s a high-profile position with a guy who likes sports a lot and doesn’t have much to do,” Howard SID Ed Hill told the Winston-Salem Chronicle in 1986. “That’s not the case. This is a one-man show and I’m on the go non-stop.”

Thirty years later, not much has changed. Most Division II HBCUs have just one full-time employee to handle this position for all of their programs. And even Division I programs are often lacking compared to the staffs at their PWI counterparts.

But even lack of resources doesn’t totally explain some of the issues some members of the media face when dealing with HBCUs. The sad fact is that while some SIDs are very helpful and responsive, which keeps journalists coming back, there are other SIDs that have the opposite effect.

When a media organization wants to cover a game or a student athlete, a phone call or email is usually the first course of action. Unfortunately some phones never seem to ring on the other end and some emails apparently get lost in some sort of timewarp at too many HBCUs. Being HBCU Gameday, we are more patient than most mainstream organizations, who will have often assigned a reporter somewhere else where they don’t have to wait for a smoke signal to know their request has been seen.

Then there are those SIDs who treat the programs who keep such a tight leash on their programs that they stifle reporters from getting to know the student-athletes, which often lead to the type of feature stories that go viral. For sure, SIDs want to limit stories that could result in bad publicity, but nothing good ever comes from keeping a flame covered.

We’ll stop now, but you get the picture.

1. You Don’t Have A Consistent Following

Now, more than ever, media is a big numbers game. Media makes its money off advertising, and companies want the most bang per buck which means numbers matter more than ever now. With increasingly limited resources media companies must focus on events and teams whose content will get them the most eyes.

Of course, even though they are similar, not all HBCU fanbases are the same. Some schools are larger. Some schools have more of a winning tradition than others. Even here at HBCU Gameday, we have to often make decisions on what to cover based on which schools will result in the most video views, website clicks and social media clicks and so on.

In our opinion, however, this is the problem that you, the HBCU student, alumni or supporter, can help negate the most. When any media outlet (especially HBCU Gameday) writes a story or does a video featuring your favorite school, don’t just like it on Facebook: share it. Some schools struggle to get traction even when they are winning and doing well. But now, more than ever, fans and supporters have the means to maximize the exposure their school receives.