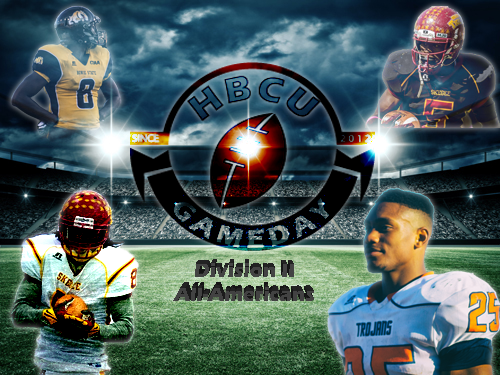 After seeing limited duty in 2015, Hall assumed the reins of Bowie State’s offense for Nyema Washington after a preseason injury and never looked back. The sophomore quarterback threw for a CIAA-record 3,596 yards while completing nearly 62 percent of his passes for 30 touchdowns. He also ran for nine touchdowns.

Cannon came into the season as HBCU Gameday’s top D2 back, and he proved it, especially late in the season. He put up big numbers despite sharing the rushing load with fellow 1,000-yard rusher Kevon Bellamy. Down the road in Richmond, Will Stanback did exactly what a D2 program hopes for when it lands a former FBS player: Dominate. Stanback led the CIAA in rushing and finished second in touchdowns to Cannon.

For the second year in a row, Manns was Bowie State’s primary offensive weapon and one of the best receivers in D2 college football period. Reece led the SIAC in receptions, yards and touchdowns.

Tabbs led ECSU in receiving and averaged 16.4 yards per catch, which is impressive for a receiver, no less a tight end.

Punter
Cody Waddell, Lincoln (PA)
Waddell got off a 70 yard punt, but he’s here mostly because 17 of his punts landed in his opponents 20.

Kicker
Will Johnson, Winston-Salem State
The hero of the 2015 CIAA Championship Game, Johnson connected in 13 field goal attempts, including a 50-yarder.

Kelly averaged 16.5 yards per punt return, including an 86-yarder.

Brown was solid all year, averaging 25.8 yards per kick return, but his 87 yard touchdown return against Bowie State may have been the turning point of the CIAA Championship. He also scored a touchdown on a punt retun.