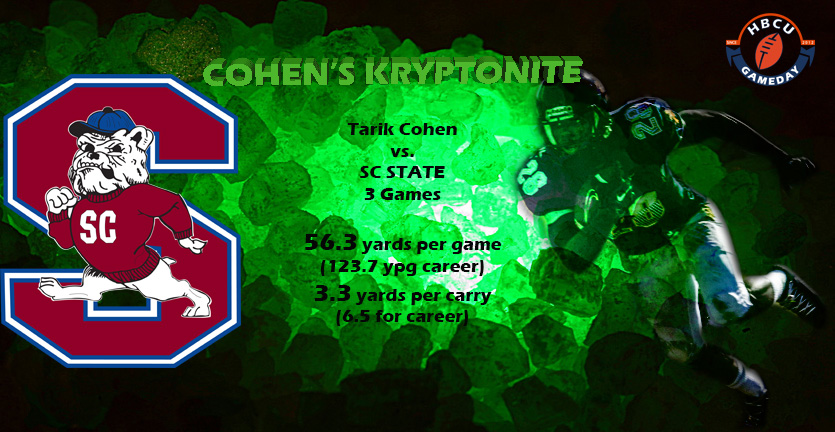 There are several storylines for Saturday’s matchup between North Carolina A&T and South Carolina State. The two long-time MEAC rivals are both still in the running for the MEAC title, but SC State’s title hopes hinge on beating their nationally ranked foes, led by all-world running back Tarik Cohen.

That’s a tall task for any team and defense, but the Bulldogs have had more success than most against the Aggies and their star back. Cohen has been significantly less productive against the Bulldogs than he has been against the rest of his opponents, averaging approximately half his career averages in yards and carries (see above) while failing to score in each of his three matchups against them.

“It’s been maybe kind of a freak circumstance of sorts,” South Carolina State coach Buddy Pough said on Tuesday. “I don’t know why they don’t necessarily be able to put up the numbers against us that they seem to put together the numbers of teams but lets hope it doesn’t happen this time. It’s the last time. I’m hoping we can hurry up and get his butt out of here so we don’t have to see him again.”

The big difference between this year and last year: All-World defensive tackle Javon Hargrave is no longer ragging across the line from Cohen. He’s now collecting checks in Pittsburgh.

“We just don’t have the experience and depth that we’ve had in the past,” Pough said. “We’re playing a lot of young guys in the box that way. When you have those kinds of situations going on, it takes a little while for them to kind of get their feet underneath them.”

SCSU historically has a strong defense, and they are pretty stout again this year, allowing 157 yards per carry, good for third in the MEAC. Will they be able to keep Cohen under control again this season? A lot of that will be on the linebackers, including MEAC Defensive Player of The Year Darius Leonard.

“He’s the leader of our bunch over there. Our linebackers in general are the leaders of our team,” Pough said. “They know how we’ve done things over the years and understand what it takes to be a top notch defense.”

Saturday is North Carolina A&T’s last home game, which means its senior day for several players, including Tarik Cohen. Though he hasn’t garnered quite the headlines of his teammate, wide receiver Denzel Keyes has been an important part of North Carolina A&T’s recent success.

Check out our video feature below.