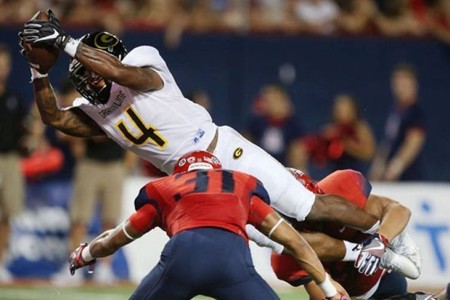 We’re almost halfway into the season and the SWAC has showcased some great games so far. Here’s what to expect for Week Five.
ALCORN STATEvs. ARKANSAS

Alcorn State is coming off a tough loss to Grambling State last week 43-18. The Braves allowed 534 yards in total to the Tigers. Alcorn had a tough time holding on to the ball where they fumbled the ball three times in this contest. The Braves are dead last in passing yards allowed in the SWAC with 324 yards allowed. In this non-conference matchup aka “Money Game” the Braves will put up a fight, but you pray no one gets injured in this matchup. Arkansas was defeated by Texas A&M 45-24 last Saturday as quarterback Austin Allen threw for 371 yards with two touchdowns.

Both teams in this matchup are coming off of losses. Arkansas Pine-Bluff lost to Jackson State last week 32-20 as the Golden Lions allowed 458 yards in total. UAPB had a tough time stopping the running game from the Tigers where they allowed 198 yards on the ground. Pine-Bluff quarterback Brandon Duncan was 25-for-39 for 267 yards with two touchdowns and one interception. Alabama State is coming off a devastating loss to Texas Southern where they were ahead late in the fourth quarter 27-16, and loss the lead to the Tigers. Hornets’ quarterback Quinterris Toppings had 323 passing yards with one touchdown and one interception. In this matchup Alabama State is hungry for a win and running back Khalid Thomas should be a key part in this game.

Jackson State got their first win of the season defeating Arkansas Pine-Bluff 32-20. JSU quarterback Brent Lyles had a marvelous game completing 14-of-24 of his passes for 245 yards with two touchdowns. The Tigers also had the running game working racking in total of 198 yards on the ground with leading rusher Jordan Johnson rushing for 85 yards with a touchdown. Mississippi Valley State was destroyed by Prairie View A&M 56-21 last week, where the Delta Devils allowed 423 yards in total. The Delta Devils had a touch time stopping the running game of the Panthers allowing 145 yards on the ground. In this matchup it’s clear to say that JSU will not miss a beat with the struggling Delta Devils.

Texas Southern Southern comes into this game riding high after two-straight wins, including a 31-27 comeback over Alabama State last week. TxSO quarterback Averion Hurts threw for 223 yards with two touchdown passes including a go-ahead touchdown pass to receiver Austin Watts. The Tigers outscored the Hornets in the second half 25-10 to secure the victory.

Alabama A&M was defeated by Southern last week 59-31 as SUBR had a field day on the Bulldogs racking up 538 in total yards! AAMU quarterback De’Angelo Ballard had a tough time through for 252 yards with a touchdown along with two interceptions. The Bulldogs do have a star in the making with true freshman running back Jordan Bentley who is ranked second in the SWAC with 302 yards rushing. In this matchup TSU quarterback Averion Hurts will have to start early on the Bulldogs, passing the ball which who ranks 9th in passing yards allowed per game with 320 yards.

PREDICTION: Texas Southern 35 Alabama A&M 13
PRAIRIE VIEW A&M vs. GRAMBLING STATE (*GAME OF THE WEEK*)
What a beautiful game this will be! In the Wild Wild West of the SWAC it is two teams who are ready to take it to the next level. Prairie View destroyed the Mississippi Valley State last week 56-21, as PVAMU wide-out Anthony Wiltz returned a punt for 77 yards for a touchdown, ran an 18 yard run for a touchdown, and received a 49 yard reception for a touchdown.

Grambling State had an impressive victory over Alcorn Braves this past week 43-18. GSU quarterback Devonte’ Kincade was 30-for-42 for 400 yards with five touchdown passes which earned him HBCU Gameday FCS Player of The Week. In this matchup both defenses will not be a factor in this game just like they weren’t last season for this game. It may come down to which team will possess the ball in the final few minutes of the game. If you’re looking for a shootout between two high scoring teams this will be it!

CIAA to move eight of 10 championships out of North Carolina
South Carolina State vs. Bethune-Cookman postponed
To Top
X