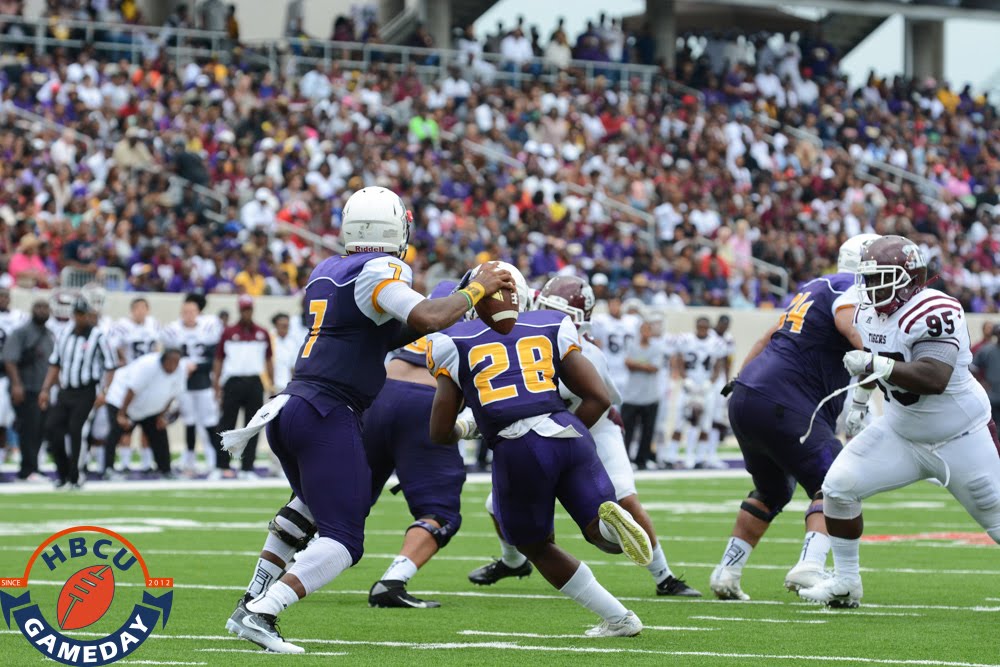 After a Week Three in which the SWAC West dominated the SWAC East 216-77 as a whole, it’s time
to turn our attention to Week Four.

Prairie View is coming off an impressive victory over Alabama A&M Bulldogs last Saturday
41-20. PVAM discovered something in the offense that was missing in the first two games of the season : a running game! Sta’fon McCray rushed the ball for 192 yards with two touchdowns against the Bulldogs. PVAM quarterback Trey Green was 12-for-23 yards with two touchdowns with one interception in the contest. Mississippi Valley State was shut out by Texas Southern 31-0 last Saturday in Houston, coming up with only 160 yards of total offense. While on the other hand, PVAM had 543 of total offense against the Bulldogs which might repeat itself against MSVS this Saturday.

Arkansas Pine-Bluff had a major upset over the 2-time defending SWAC champions Alcorn Braves in the Thursday night game televised on ESPNU. This game was one for the ages with the game going in three overtimes! UAPB quarterback Brandon Duncan threw for a career-high 505 yards with 4 touchdowns deserving SWAC & FCS player of the week, and looks to repeat the same performance against Jackson State this Saturday.

Jackson State is experiencing trouble at the quarterback position as starter LaMontiez Ivy was taking out the game in the 3rd quarter for poor play against Grambling. Brent Lyles took over in the game and threw for only 150 yards with an interception. JSU only had 275 yards in total offense last week against GSU, which will be not enough against the high-flying offense of UAPB! JSU has to get everything under control when facing UAPB this can get ugly real quick!
Prediction: ArkansasPine-Bluff 30, Jackson State 14
ALCORN STATE VS. GRAMBLING STATE *GAME OF THE WEEK*

All of the SWAC fans have been waiting for this rematch of this game since the 2015 SWAC Championship. Alcorn State is coming off a major loss to Arkansas Pine-Bluff 45-43 in triple overtime and will definitely be looking to redeem itself. Quarterback Noah Johnson passed for 355 yards with three touchdowns and rushed for 62 yards with three touchdowns. Lenorris Footman and Marquis Warford did not participate in the contest, but will play in this game against Grambling.

GSU quarterback Devonte’ Kincade threw for 152 yards with a touchdown, and wide-out Chad Williams caught 7 catches for 131 yards with a touchdown. The key to this game will be how Kincade performs in this matchup against the two-time SWAC champions.
Prediction: GramblingState 45 Alcorn State38
SOUTHERN VS. ALABAMA A&M

Southern went on a scoring outrage against Alabama State 64-6 last week, totaling 541 yards of offense against the Hornets,. Southern receiver Willie Quinn had four receptions and 178 yards with three touchdowns, followed with a 73-punt return touchdown. SU quarterback Austin Howard known as a game manager went on a passing frenzy, completing 14-of-27 passes for 304 yards with four touchdowns and one interception.

Alabama A&M Bulldogs are coming off a tough loss against Prairie View 41-20. The Bulldogs had a bright spot at the running back position with Jordan Bentley with 126 yards on the ground with a touchdown. SU is clearly the best all around team in the SWAC, and will roll against the Bulldogs!
Prediction:Southern 45 AAMU 10
TEXAS SOUTHERN VS. ALABAMA STATE

Texas Southern got their first win in the Michael Haywood era with a shut out victory over the Mississippi Valley State Delta Devils 31-0. TxSO quarterback Averion Hurts threw for 273 yards with three touchdowns and one interception. On the defensive side TxSO had a ball against the Delta Devils offense with two interceptions, and five sacks.

Alabama State is going through a new evaluation with the coaching staff and personnel after a horrible effort against Southern last week. Quarterback Quinterris Toppings threw three interceptions and will have to play better against a new tough defense of Texas Southern.
Prediction: TexasSouthern 20, AlabamaState 3