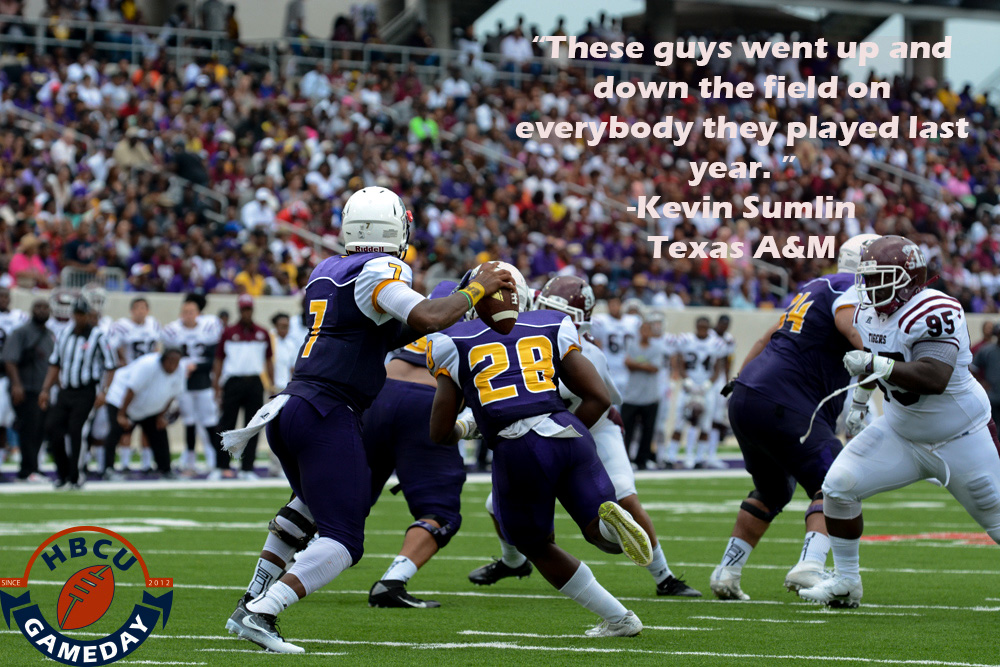 When PVAM (1-0) rolls into Kyle Field to take on Texas A&M, they will be the unquestioned underdog against their in-state, FBS foe. But don’t expect their opponents take them to lightly.

TAMU coach Kevin Sumlin is well aware that PVAM is more than capable of putting points on the board.

“They were the leading scoring team in the FCS,” Sumlin said at his weekly news conference. “These guys went up and down the field on everybody they played last year. Willie Simmons has done a great job there.”

Sumlin’s Texas A&M squad is coming off a hard fought 31-24 win over no. 16 UCLA last Saturday. Prairie View’s high-scoring offense was held to just 29 points after being down 17-6 at one point against Texas Southern.

“These young men are resilient. They do have a knack for overcoming adversity,” Simmons said at his weekly news conference. “That’s something that we talk about daily.”

They’ll definitely get a test of adversity in College Station, going up against a team with SEC

The game will mark the first time that Texas A&M has ever matched up against a SWAC team. Still, Sumlin isn’t taking Prairie View lightly.

“We’ve got some challenges, some things you put on film that get your attention,” Sumlin said. “I don’t care you who you’re playing, you average 45 points a game after that many games, you’re doing something right.”

For his part, Simmons acknowledges his team will have their hands full, but the former Clemson star seems prepared for the challenge.

“We’ve signed up for this game. We know the stakes at hand and and we’re gonna do our best job as a staff to get these young men prepared and to go into this hostile environment and hopefully have a chance to make history.”