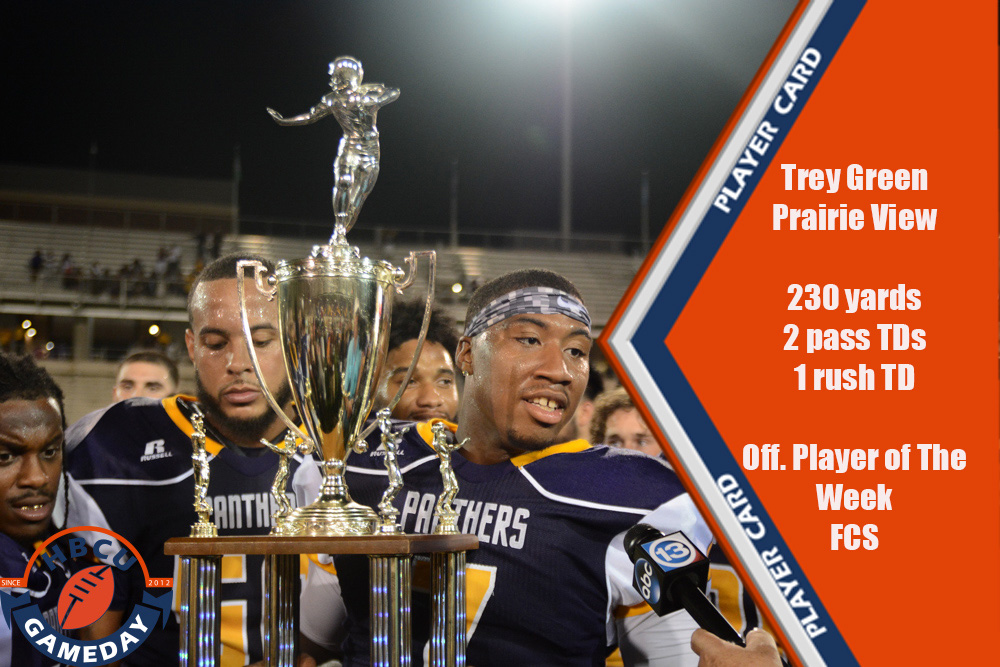 The first week of college football season is in the books and it was an exciting one. Every week we’ll be bringing you the offensive and defensive players of the week for the FCS and Division II conferences.

Trey Green is our first FCS National Player of the Week. He led his team to a comeback victory over rival Texas Southern to win the Labor Day Classic and christen the school’s new stadium in a game they’ll be talking about for some time in Texas.

Southern’s Lenard Tillery, who rushed for 163 yards and a touchdown against FBS opponent University of Louisiana-Monroe.

Texas Southern’s Derrick Griffin, who caught six passes for 90 yards and a touchdown against Prairie View. 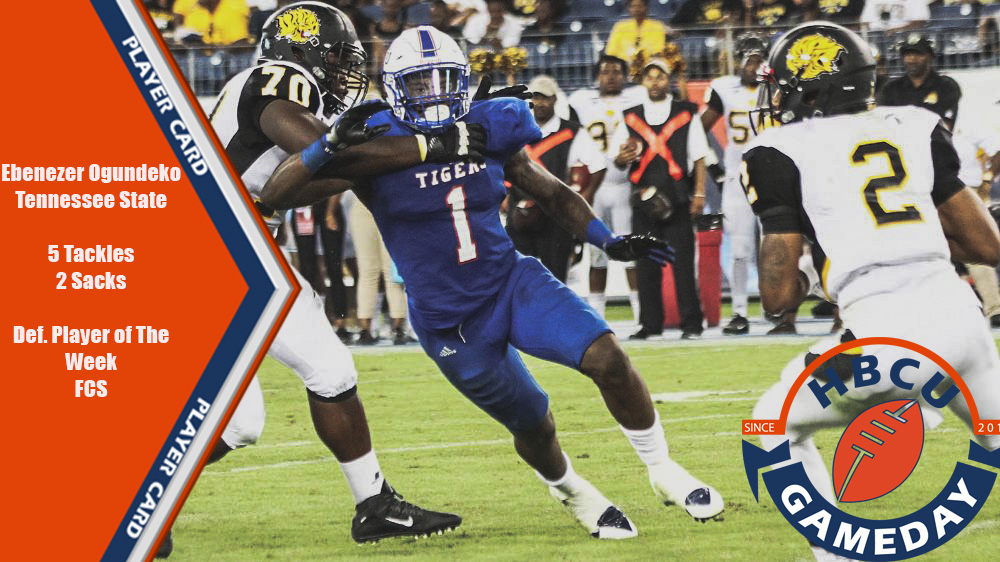 Tennessee State’s Ebenezer Ogundeko picked up where he left off last season. The former Clemson DE racked up two sacks in his team’s season-opener vs. UAPB in a shutout during the John Merritt Classic.
Honorable mention:
-South Carolina State LB Darius Leonard, who finished with 16 tackles and forced a fumble against UCF.

-Texas Southern’s Jarrius Morrell, who had five tackles, including 3.5 for loss 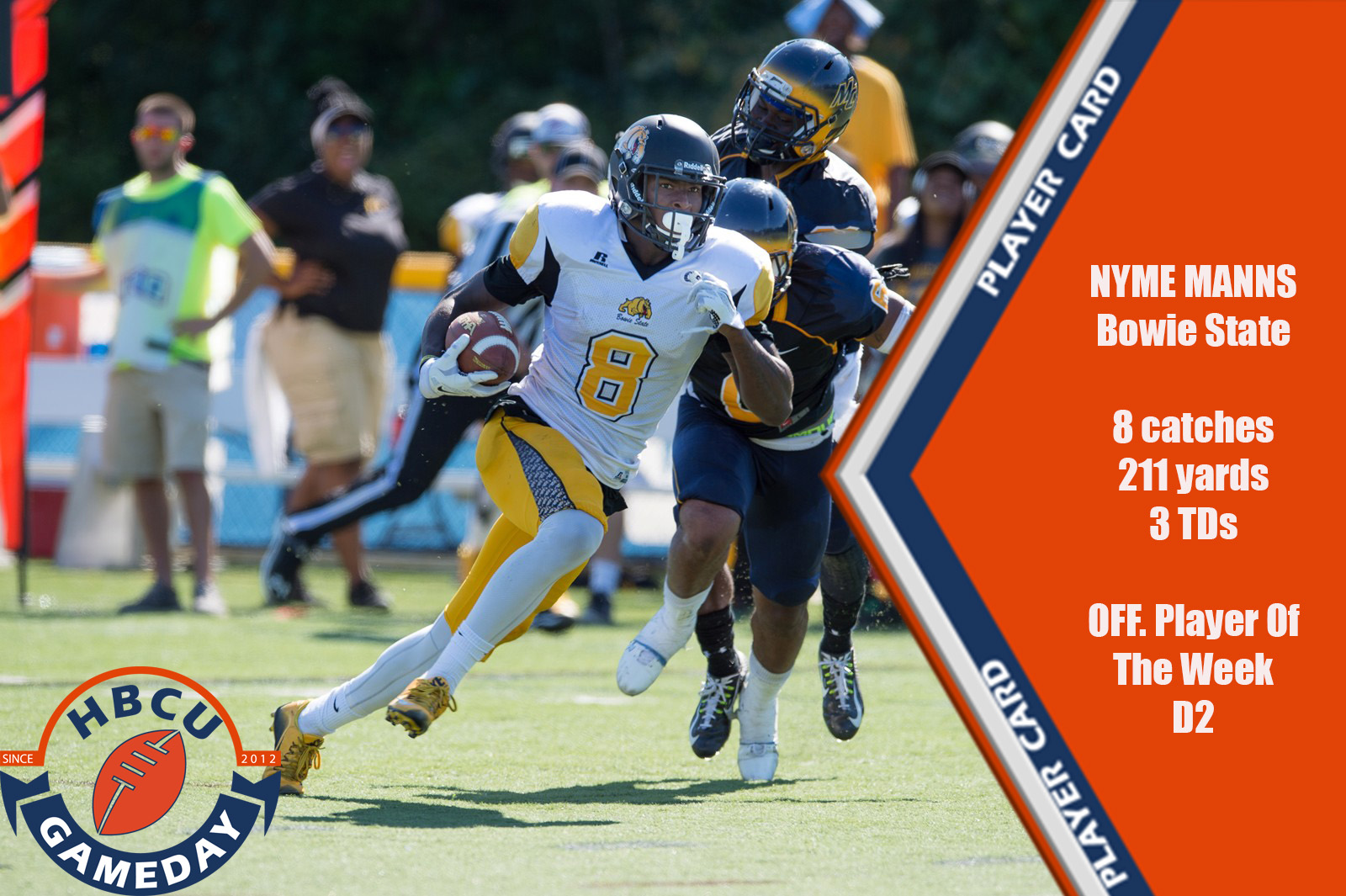 Nyme Manns entered the 2016 season as one of the best players in black college football, regardless of division, and in Division II football. He backed that up with a huge game against Seton Hill, scoring three touchdowns and coming up with several big plays.

-Lane’s Marcus Holliday, who rushed for 128 yards and two touchdowns vs. Texas College

-Tuskegee’s  Kevin Lacey, who completed all eight of his passes for 178 yards and a touchdown against Clark-Atlanta

-Virginia State’s Kevon Bellamy, who ran for 82 yards and two scores vs. Lenoir-Rhyne 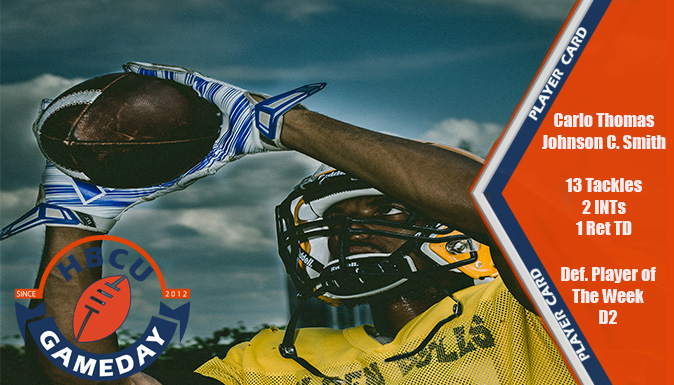 Carlo Thomas led D2 football in interceptions in 2015 with 12 picks in 10 games. He picked up right where he left off in 2016, picking off two passes and returning one for a touchdown against Wingate. He also had 13 tackles.

-Virginia Union linebacker Eddie Johnson, who recorded 16 tackles, three of them for a loss vs. LIU Post.