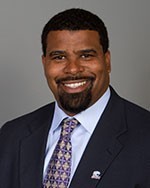 A former Alabama State star is headed back to the SWAC to coach, but at a rival school. Travis Pearson, a former ASU linebacker, has been named defensive coordinator at Alabama A&M, according to WAAY-31.

//platform.twitter.com/widgets.jsPearson, 44, has spent the last two seasons as defensive coordinator for South Alabama. The team finished fifth in total defense in the Sunbelt, but finished second overall in pass defense.

Pearson played in the Arena Football League from 1994-2001 after leaving ASU.