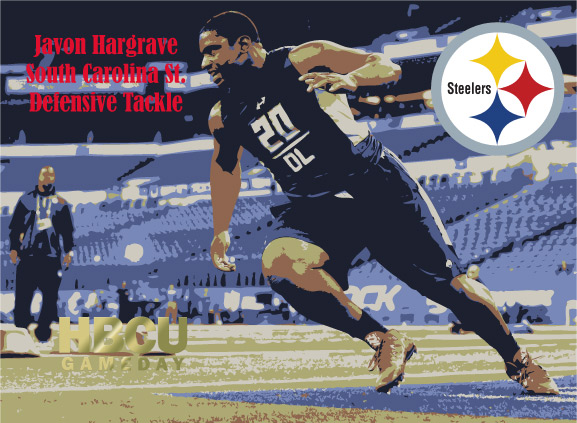 The first HBCU player is off the board, and as expected, it is Javon Hargrave. The South Carolina State defensive lineman was selected by the Pittsburgh in the third round with the 89th pick overall in the NFL Draft on Friday.

The 6’1, 290 pound Salisbury, NC native was simply dominant his last two seasons in Orangeburg, racking up 29.5 sacks and a host of honors including back-to-back MEAC Defensive Player of The Year awards and All-American nods. He also took home MVP honors at the 2014 Atlanta Classic and the 2015 MEAC/SWAC Challenge.

Hargrave is the highest selected player out of South Carolina State since Anthony Cook was taken in the second round (35th overall) in the 1995 NFL Draft by the Houston Oilers.

The Steelers have a long history of collecting talent from the HBCU ranks, going back to Southern’s Mel Blount, Alabama A&M’s John Stallworth and South Carolina State’s Donnie Shell, who the team picked up as an undrafted free agent.