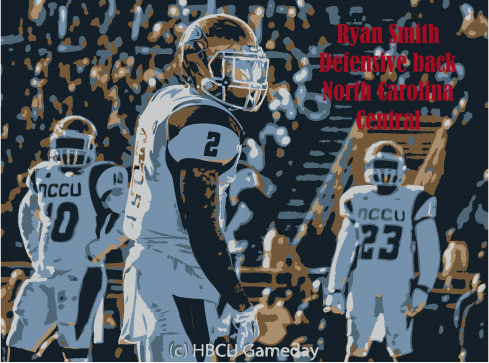 Ryan Smith entered North Carolina Central on a partial football scholarship in 2011. On Saturday he became an NFL player. The NCCU defensive back was selected in the fourth round of the NFL Draft (108th overall) by the Tampa Bay Buccaneers.

Smith becomes the first player from NCCU to be drafted as a Division I prospect and the first to be selected since defensive end Greg Peterson was picked in the fifth round of the 2007 NFL Draft. He is the highest selected player from NCCU since Robert Massey was selected in the second round (46th overall) in 1989.

A 6’0, 189 pounds, the Upper Marlboro, MD native routinely made big plays for NCCU, coming up with seven turnovers as a freshman (four fumble recoveries, three interceptions). He didn’t have any interceptions as a junior but came up with a big fumble recovery against North Carolina A&T to help his team secure a piece of the MEAC title in 2014. He was a second-team All-MEAC selection in 2015 after breaking up 11 passes, including two interceptions.