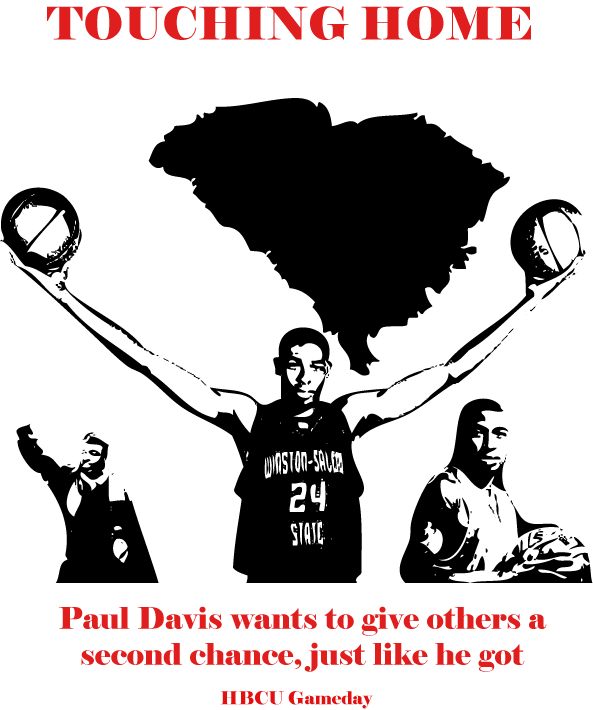 HBCU Gameday is giving the players a chance to share their experiences first hand. Former Winston-Salem State star Paul Davis is a pro basketball player who has traveled the world, yet still has a passion for his tiny South Carolina hometown.

As a young kid in Clio, South Carolina, I knew I wanted to be a fireman. I guess its safe to say that I’ve always wanted to help or somewhat save others. I could only imagine myself spraying the water hose while flying on it at the same time as if I was in a cartoon movie.

I was the happiest third grader at the time knowing exactly what I wanted to do when I grew up. However, things did not go as planned after attempting to become one of the cool kids and being sent to the alternative school.

“One more incident from you Mr. Davis and you are out of here,” my principal told me one day.

A day later I was in the hallway in the middle of a small altercation that was totally out of my control, but being near the situation made it seem like I was involved. I was enrolled in another school the following day.

I was in tears because I did not know what I had gotten myself into. Being in a new school with no friends, students that actually committed crimes, used drugs, and used alcohol ensured me that I did not belong there. Just when I thought it could not get any worse, my mother signed me up for boot camp. I was done!

Did I really deserve to be in boot camp? Maybe, maybe not. I did not like the idea of boot camp because I wanted to be “cute”. I worked out in good jeans, good shirts and Timberland boots. I realized that not only was I destroying my clothes, but I was destroying my image.

Something had to change, I told myself. I could not become a victim of this school. Slowly, I began to change. I tucked my shirt in everyday, dressed accordingly for boot camp, made relationships with teachers — and most importantly I began to smile again. My life was changing one day at a time. Before I knew it, it was all over. 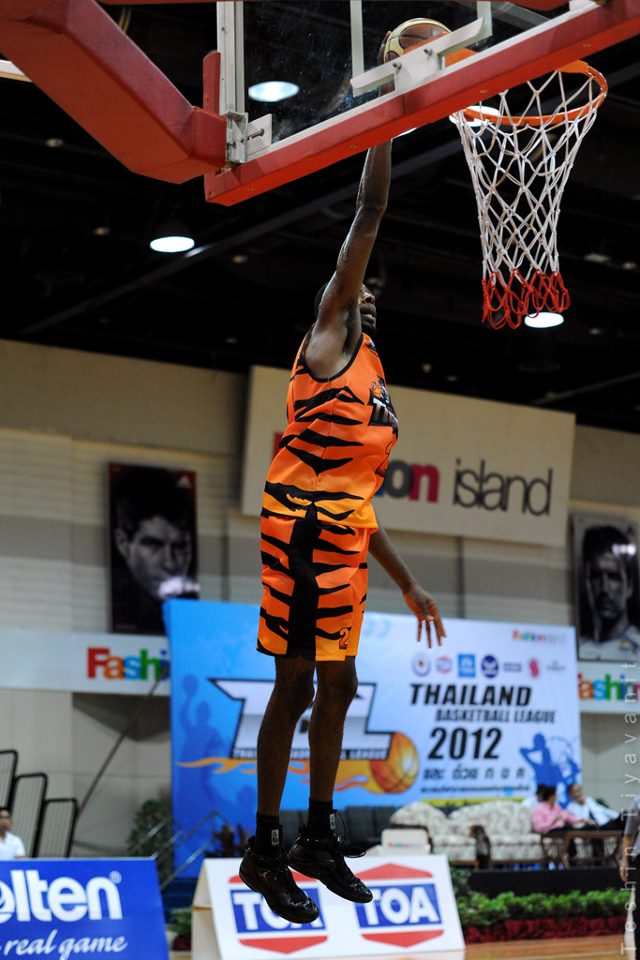 The following year I was facing a huge problem. My friends — even the middle school coach wanted me to play basketball because of my height, but my mother was not having that at all. She had fear of me being in the streets so of course it was not so easy for her to release me without a struggle. The coach and a few friends finally came to my house to talk with my mother about the situation. After a lot of pleading and promising, she gave in.

“Paul, I will allow you to play basketball, but you will bring your butt straight home after every practice and game or you’re done,” she said firmly. 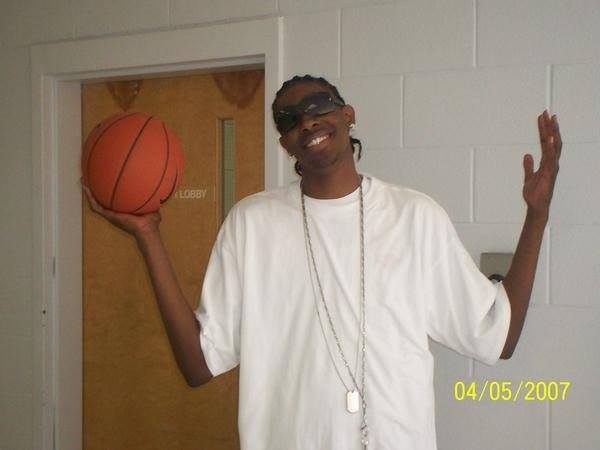 “Hey come here son,” my teacher called to me one day. “Do you play basketball?”

Coach Ken Spencer was the teacher that questioned me. He kept his word and made sure that I learned how to play structured basketball. I was a rising sophomore going to camp with the varsity team. If you could only imagine how I felt deep down inside, it was like a kid on Christmas day. I was nervous, but excited at the same time.

After having a pretty good camp performance as a rising “sophomore” I received my first college basketball letter from Lenoir-Rhyne University. That letter flipped a switch for me. That was my ticket to bigger and better opportunities. By the time I became a senior, I would have received letters from the University of North Carolina-Greensboro, Charleston Southern University, Coastal Carolina University, North Carolina A&T, Little Rock Arkansas, Tennessee, Gardner Webb, The Citadel and Liberty University.

But I didn’t end up at any of those schools. I actually went to a school that did not recruit me.

I followed the same teacher that taught me the fundamentals of the game. Coach Spencer was promoted to a coaching position at Winston-Salem State University who was making a transition to Division I.

At 6’9, I stood out on the court, and some scouts noticed, but I was still raw.

My junior a scout showed up again to watch me play, but my performance was not the best. I guess I left it on the floor two days prior to that game. I had posted a career high of 32 points, 15 rebounds and 7 blocks against the MEAC Champs, Morgan State. Later that year I was able to enter my name in the 2010 NBA draft, but of course I withdrew my name to finish college. No way was I ready for the NBA! It takes a lot for me to say that, but I did not put in the necessary work to actually get drafted by a NBA team.

In December 2011, I signed a contract to play professional basketball overseas. It wasn’t the NBA, but it was still a dream come true. I was able to get paid for doing what I love to do. Now I’m in my fifth year as a professional basketball player overseas and I’ve touched each continent that you are allowed to play basketball on, playing on teams in eight different countries all together. I actually finished my coursework for my degree while playing in Australia in 2012.

I notice something strange in each different country every time I’m in a new one. I notice that a lot of kids are not as happy as a kid should be at times, some kids do not have shoes, some no food, some no parents, some no home training, some with talent that no one will ever see. I’ve interacted with kids in Europe, South America and Australia on a personal level. They were all intrigued with my height! I was nothing less than a NBA player to those kids!

After all of the experience that I had with these kids, my emotions would change day-to-day. I thought about the entire world of what so many kids could be going through, but something turned my focus towards my hometown; which led me to start my own basketball skills academy: Davis/Spencer Basketball Skills Academy. I hooked up with Coach Spencer again— the same teacher that taught me the fundamentals of basketball. 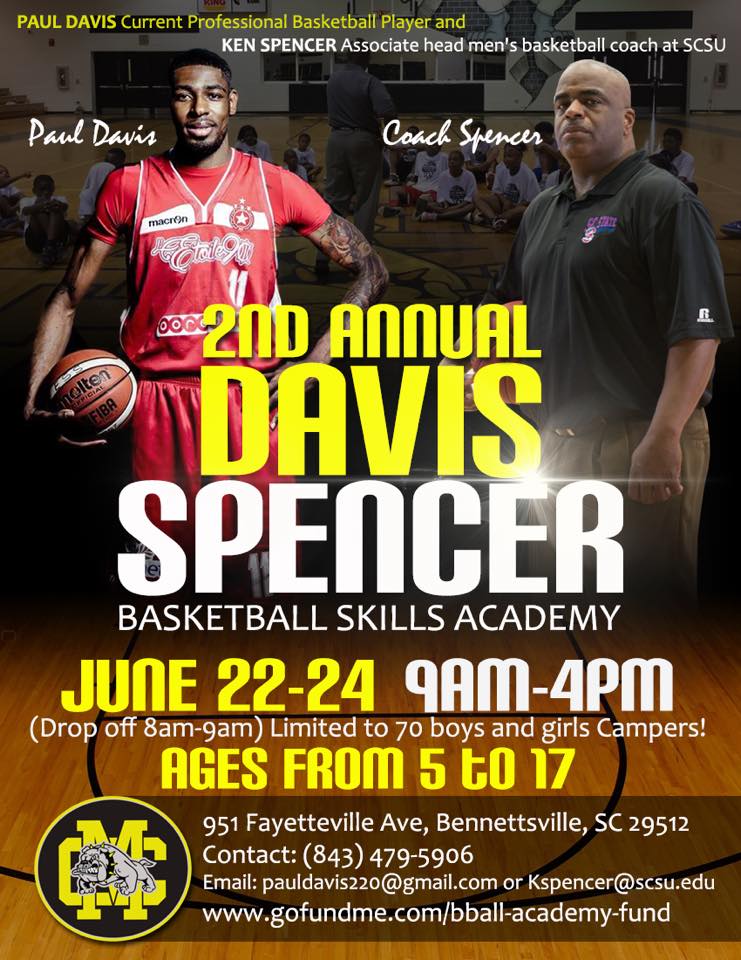 I want to give back to my community because there are kids that need someone like myself around. I want to invest in these young kids. I want them to say because of Paul, I did not give up and I was able to achieve my goals/dreams. They all need to know that the world is bigger than `Marlboro County and if you get the opportunity to step outside of it then do so.

I hope to bring positivity and knowledge of education within each one of these young kids. These kids need leadership and a role model. Not saying that they do not have this inside of their homes, but it is totally different when you can have a guy that is from your home town to travel all over the “WORLD” to come back and be living proof that no matter what, you can do whatever you want to do as long as you work hard, work towards it and put your mind to it.

That teacher changed my life and now its my turn to change someone’s life. 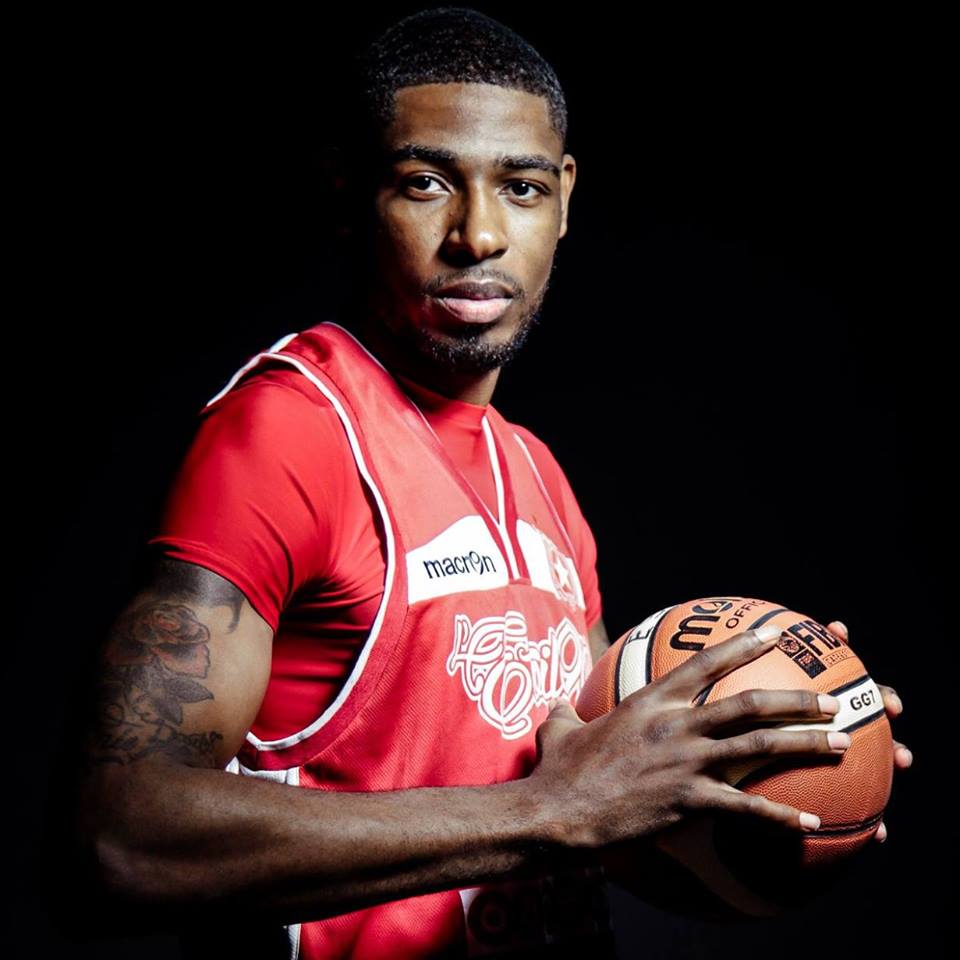 The Davis/Spencer Basketball Skills Academy is a three (3) day summer camp for boys and girls ages 5-17 that was founded by Paul Davis and Ken Spencer.

The Davis/Spencer Basketball Skills Academy is a three (3) day summer camp for boys and girls ages 5-17 that was founded by Paul Davis and Ken Spencer.