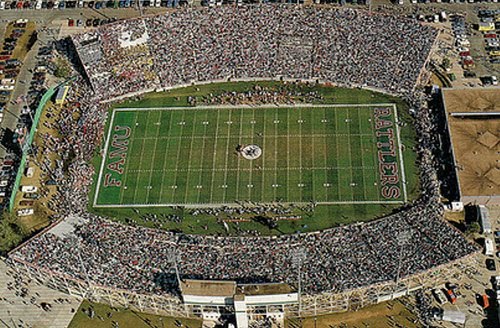 One of black college football’s preeminent programs may have a new home in the not-too-distant future. A new power point given to a Florida A&M athletic committee revealed that there may be a new stadium in FAMU’s future.

The document showed concept art for a future stadium. Phase Four of the school’s current development plan includes construction of a 35,000 seat stadium , according to Tallahassee.com. Development of the stadium is slated to begin in 2020.

FAMU currently plays in Bragg Stadium, which was built in 1957 and renovated in 1982.

On to current news, the school had a relatively successful season at the box office in 2015.

Despite a 1-10 season in 2015, FAMU sold 3,677 season tickets in 2015. They also reported an eight percent jump in fan attendance, a 12 point increase in per game ticket sales and 30 percent increase in premium seating.