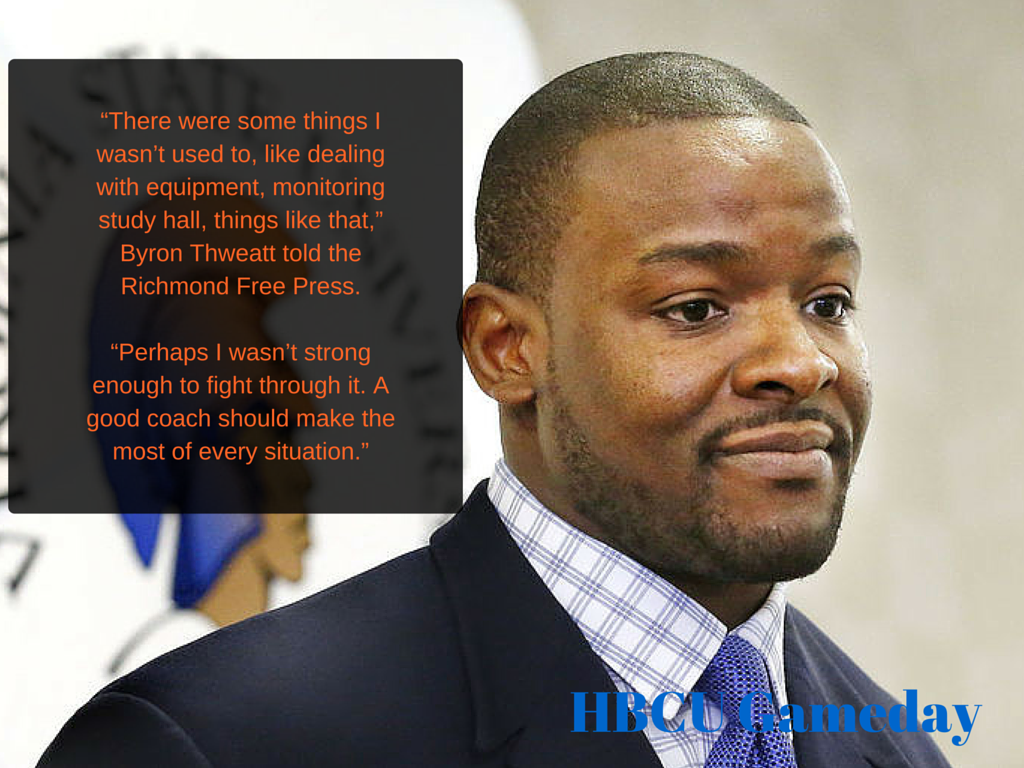 We broke the news on Wednesday that Byron Thweatt was leaving Virginia State. The new James Madison linebackers coach explained his decision to leave after one season at VSU.

Thweatt, who starred at Virginia, said it was a tough decision to leave VSU.

“It was a really tough and emotional decision,” Coach Thweatt told the Free Press on Wednesday. “I love Virginia State. My parents went here. And I love my team — an amazing group of guys with tremendous character. It was a joy to be here. But I’m making the move based on what’s best for my family.”

He also admitted that the realities of coaching at VSU were possibly more than he could handle. He had previously coached at UVa and FCS Richmond before coming to VSU, a D2 HBCU.

“There were some things I wasn’t used to, like dealing with equipment, monitoring study hall, things like that,” he said.

“Perhaps I wasn’t strong enough to fight through it. A good coach should make the most of every situation.”

Thweatt coached VSU to a 6-4 season his lone year in Ettrick.

Hey, at least he was honest. Better to leave than have someone leading your program whose heart isn’t in it. How can you instill confidence in young men in the team and the institution if you aren’t confident yourself.

For now, the next man is another non-HBCU alumnus from the FBS, former Virginia Tech receiver Justin Harper. Harper thinks he is the man for the job and hopes the VSU administration will keep him as full-time coach.

“I’m claiming it. I’m claiming it now,” Harper told WRIC. “Going to school in Virginia and being a Hokie alum I’ve got a lot of people in my corner around here. I’m claiming it. This is what I want. I’ve prayed on this thing, and it’s not by coincidence the opportunity came.”