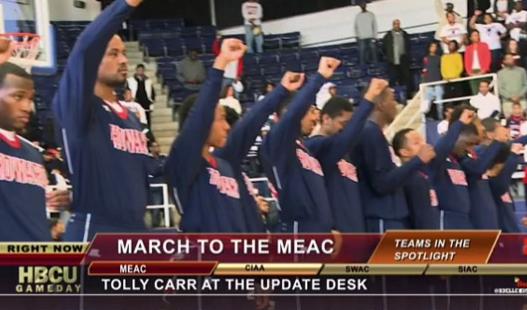 Howard lost to Harvard University 69-61 at Burr Gymnasium in Washington, D.C. on Saturday. Despite that loss in what Howard’s legendary Sports Information Director Ed Hill called “the biggest game in school history,” everyone in the gym won, including myself as an HBCU attendee.

I came into the day’s events an essential HBCU virgin. To be fair, I had gone to third base with the HBCU experience having attended a couple of football games this fall, like when I covered 2015’s match-up between Howard and Hampton Universities– AKA “The Battle of the Real HU.” But that game was held at a neutral site and so the idea of an HBCU school fan base on its home territory was lost upon me.

On January 16, though, the HBCU experience hit me full force. Before a sold out crowd the Bison fell but put up a valiant fight that even the most talented analysts couldn’t have predicted, especially since they were without their leading scorer James Daniel III, who is averaging 28 points per game– the most in all of Division I Men’s Basketball.

What happened in-between the sidelines and baselines of the court was just the beginning of the unparalleled experience for a newbie like me. The 2,700 onlookers inside of The Burr created an atmosphere that I can only begin to describe with one word– electrifying.

During the singing of the Black National Anthem the entire men’s basketball team held their right fists up in unison, creating an image of black power that is hard to describe in words.

//platform.twitter.com/widgets.js Howard’s band was in attendance, accompanied by three different dance ensembles gyrating to no shortage of mainstream hits. And when the band wasn’t playing, the in-house D.J. and emcee kept the crowd engaged with hype talk and club bangers like Future’s March Madness– which personally had me wanting to drop everything and unleash a few of my own Cam Newton-influenced dabs.

The most unique moment of the day, though, came when the emcee announced during the halftime break that a special time was upon us. Immediately following his declaration the DJ turned on the 2009 classic ‘Swag Surfin,’ and I can’t sum it up any better than to say: all hell broke loose.

The Burr erupted and the nearly 3,000 fans inside embraced each other and began to sway from side to side, following the song’s directions.

//platform.twitter.com/widgets.js For those of you who have read this post but fail to understand why I was so enamored, remember that this was my first time in an atmosphere like this.

I’ve been to games at bigger Division I schools, but the 2,700 inside of The Burr captivated me more than their counterparts found at SEC or ACC games, or even more than the legions of fans at a professional match up.

This game introduced me to an unparallelled community…a family, essentially– and it’s one I seriously urge any other HBCU virgin to explore first hand for themselves.