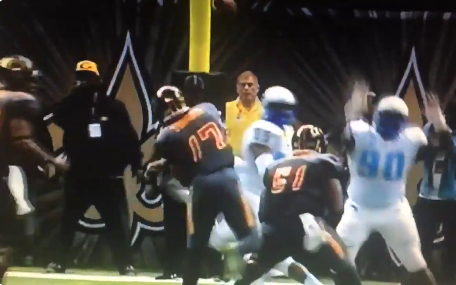 Southern has owned the Bayou Classic for the last three years, but Grambling State put an end to that on Saturday night. Grambling, led by quarterback Jonathan Williams, beat Grambling 34-23 to claim their first win in the rivalry game since 2011.

“My kids are so resilient. They’ve been through a lot and I’m just fortuante to have them,” Broderick Fobbs told NBC Sports after the game.

Early on it looked as if Southern would make it four straight, as it got out to a 20-3 lead thanks to quarterback Austin Howard and running back Lenard Tillery.  Howard threw for one TD pass, then Tillery ran for one, as did Howard.

Howard in for the score. SU up 20-3 over GSU. #bayouclasic pic.twitter.com/eMUsnfrMRH

//platform.twitter.com/widgets.js
Down by 17, Williams and Co. began their comeback with this unconventional touchdown pass.

Better to be lucky than good 🙈 pic.twitter.com/q3DDMsuOhh

//platform.twitter.com/widgets.js
Then Southern helped out with not one, but two turnovers, helping Grambling cut the lead to 20-17 heading into halftime.

Southern shoots itself in the foot again pic.twitter.com/BCVRMY3imH

//platform.twitter.com/widgets.js After a Wiz-inspired halftime, both teams traded blows in the third quarter before this touchdown pass from Jonathan Williams to Chad Williams gave Grambling the lead for good.

//platform.twitter.com/widgets.js Grambling improves to 9-2 (9-0 in the SWAC) and will compete against Alcorn State in the SWAC Title Game next Saturday in Houston. The winner will represent the SWAC in the first-ever Celebration Bowl against North Carolina A&T on Dec. 19.