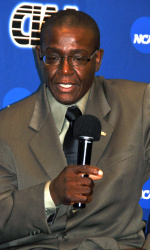 Hearing reports that Kenny Phillips, longtime Fayetteville State head coach and former player at East Carolina, has died. He was a good man.

Phillips played his college football at East Carolina, where he also began his coaching career as graduate assistant in the mid-1980s. He went on to work at Catawba, North Carolina A&T, Ohio and NC State before taking over at FSU.

Phillips led FSU to three CIAA Championships (2002-2003 and 2009). He led Fayetteville State to a 75-63 record in 15 years at the school, and last coached at Hampton before an illness forced him to resign.