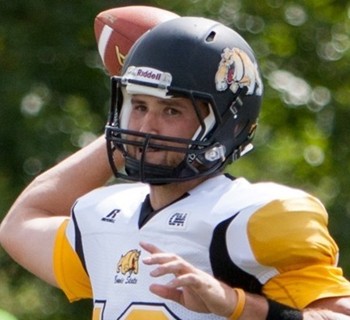 Matt Goggans may be the leading candidate for CIAA Offensive Player of The Year, but the Bowie State quarterback won’t get a chance to win it.

The NCAA has declared Goggans ineligible for the 2015 season, according to Bowie State.

“Due to an incorrect accounting of participation and competition time prior to his entrance into Bowie State University, which could have possibly resulted in ineligible competition for the 2015 football season, student-athlete Matthew Goggans has been ruled ineligible for intercollegiate participation and competition for the 2015 football season”, Bowie State Athletic Director Clyde Doughty, Jr. said in a release Thursday afternoon.

Goggans, who previously played at North Carolina Central, leads the CIAA in passing yards per game (312.0) and touchdowns (16) through five games. In terms of national rankings, Goggans is 7th in TD passes and 9th in passing yards.