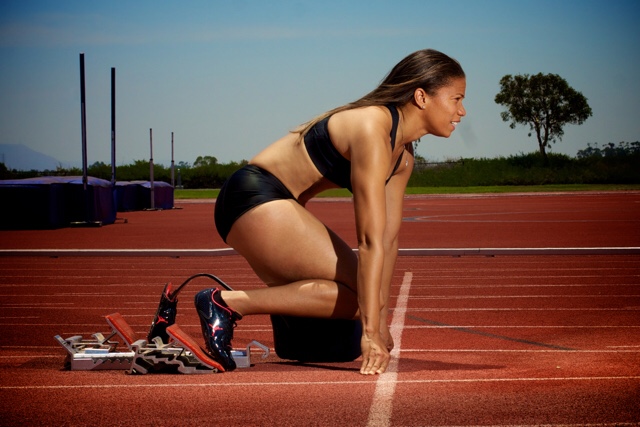 April Holmes is still a track star nearly 20 years after graduating from Norfolk State University. The 1996 NSU grad recently won two events at the U.S. Paralympics Track and Field National Championships and is eyeing a fourth-straight appearance in the Paralympics in 2016.

//platform.twitter.com/widgets.js Holmes won first place in both the 100 and 200 meter dashes in the championships held at Hamline University in St. Paul, Minn for the T43/T44 classification. She ran a time of 13.64 in the 100 meters to win by .76 seconds. She ran a 28.74 in the 200 meters, slightly more than a second faster than the next closest competitor.

That is just the latest accomplishment for a woman who has battled back from a setback that would have crippled many people, mentally as well as physically.

Holmes was a force on the track, winning CIAA and All-American accolades during her collegiate career in the mid-1990s. She was working in Philadelphia in 2001 when a slip off a train platform during her commute cost her her leg.

“I accepted the accident as part of God’s plan,” Holmes said on her website, “I have complete faith in this is how I was supposed to be to help carry out his will.”

After nine months in recovery, Holmes recovered from the setback, and in 2004 won a bronze medal in the long jump during her first Paralympic Games in Athens. She won gold in the 100 meters at the Beijing Games in 2008 and a bronze in the same event in London in 2012.

She also broke ground off the track, becoming the first woman and first amputee to be signed to an endorsement deal with the Jordan Brand.Last January she received the National Collegiate Athletic Association’s 2015 Inspiration Award – an honor reserved for athletes who became role models after overcoming a life-altering adversity.
And while she’s enjoying her second chance at an athletic career, Holmes sees a bigger reason for why she’s doing what she is.

“I’ve had a very successful career, and it just keeps getting more rewarding because it’s no longer about me,” Holmes told NCAA.com. “It’s about the people around me who I can motivate to be great in their own lives, people who I can inspire to overcome obstacles and succeed.”