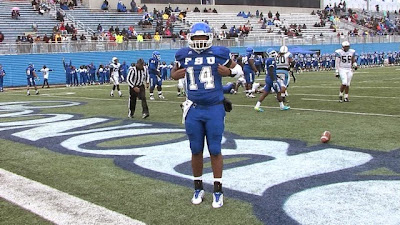 It wasn’t easy, but Fayetteville State survived a double-overtime scare to beat Livingstone 31-28 on Saturday.

Livingstone had a few laughs early at the expense of Fayetteville State; ultimately the Broncos would leave the Blue Bears feeling the grief of a game they should have won. It was cold and wet on this homecoming Saturday and FSU had trouble holding on to the ball early on.

Fayetteville State got off to a rough start when quarterback Jemeryn Jenkins tossed up a misguided pass that went straight up in the air and came right back down in the arms of Livingstone’s Rhyon Sykes.

Down 7-0, the early whimsical turnovers were not over for the Broncos as a botched punt was recovered by Livingstone’s Chris Ellerbe who sprinted into the end zone to give his team a 14-0.

Jenkins would redeem himself before the half, leading FSU on a ten play 57 yard drive that ended in spectacular fashion. Ricardo White caught a ten yard pass right at the goal line and absorbed a hit so hard that it sent his helmet flying in the opposite direction. He was able to hold on to the ball despite the sacrifice he made with his body and the play showed that the earlier comedy show was now over. The drama was about to begin.

After a scoreless third quarter, things began to heat up the fourth. It started with Derek Bryant’s two yard run up the middle capped a nine play 45 yard drive and tied the game at 14.

Livingstone’s Drew Powell put together a drive that included a pair of twenty yard passes and then found Arthur Bowden on a seven yard score that had the Blue Bears up 21-14.

Fayetteville State head coach Lawerence Kershaw decided to go with Bryant at quarterback late in the game and it paid off. He went 4-6 on six straight passes connecting with Chris Hubert on an 11 yard touchdown that tied it at 21, ultimately forcing overtime.

Livingstone struck first in overtime as Powell found Bowden again for a twenty yard touchdown, putting the pressure on Fayetteville State to score. FSU would do just that, as Bryant took the ball in from two yards out to send the game into overtime.

In the second overtime the Broncos got the ball first and their drive stalled after two incomplete passes. Antonio Mayo, who had the horrific punt earlier, was staring down a 45 yard attempt. After the game Mayo would admit to having a bad case of the nerves when he jogged onto the field.

“My heart was beating through my chest, I had no idea how long the kick was,” Mayo said. Despite the nerves he nailed the kick right through the uprights to put FSU up 31-28.

The Blue Bears’ double overtime drive seemed doomed from the beginning. A holding penalty backed the Blue Bears up to the 35 yard line and three plays later they were staring at fourth and goal from the 32 yard line. Powell bought some time with his feet rolling out to the left and it sucked the defense all the way in.

He found tight end Austin Higgins all by himself on the opposite side of the field and heaved the ball across his body for a walk-in score. The Livingstone players celebrated wildly on the field for about thirty seconds until the crowd noticed a flag on the field. Powell had crossed the line of scrimmage before he made the pass and since it was fourth down that was the end of the game. The Broncos immediately went from dejected to slam dancing on the field when they saw the flag. The final laugh of the day belonged to them.

FSU will hosts Winston-Salem State, a team that has not lost a divisional game in the CIAA for the last four years. The winner of the game will represent the Southern Division in the CIAA Championship Game. Kickoff is set for 1:30 in Fayetteville.