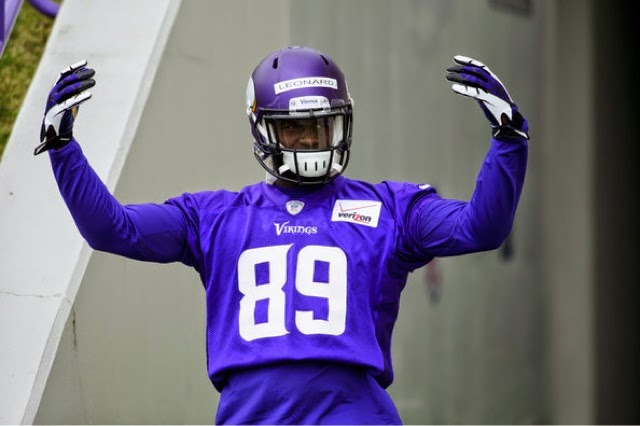 We aren’t sure if Isaiah Crowell and AC Leonard know each other, but the two rookies have a lot in common. Both started their careers at SEC schools, (Crowell at Georgia and Leonard at Florida) before legal issues led them to play their final two seasons at HBCUs (Alabama State for Crowell and Tennessee State for Leonard) and entering the NFL Draft after their junior seasons. Neither was drafted in May, but both found homes as UDFAs.

Well now both Crowell and Leonard are starting to turn heads at their first NFL Camp.

Crowell is competing for time in a crowded Cleveland Browns backfield with veterans like Ben Tate and rookies like Terrance West. Still, the former SEC Rookie of The Year is making a wave in Cleveland, where Fox Sports’ Zac Jackson says the Browns consider him “a keeper.”

Up in Minnesota, Leonard has left an impression on Vikings Territory writer Brett LaBathe. LaBethe took an in-depth look at Leonard as he battles for a roster spot at tight end.

“There is no doubting Leonard’s receiving ability. Leonard has displayed a nice release off the line and seems to be fluid and athletic in route running. He also possesses the type of speed and acceleration needed to get behind a defense and stretch the field from the tight end position.”

Regardless of what happens to these two players from here on out, it’s good to see that HBCUs are offering student-athletes a second chance when the big schools turn their backs on them.