Share
Tweet
Share
Share
Email
Comments
Offensive Player of The Year
Jordan Reid, NC Central
On a day when the majority of MEAC squads struggled with superior squads, NC Central held its own against nationally-ranked Towson. Jordan Reid put together one of the better games of his career, completing 26 of 47 passes for a career-high 297 yards. He also threw two touchdown passes in the 35-17 loss. 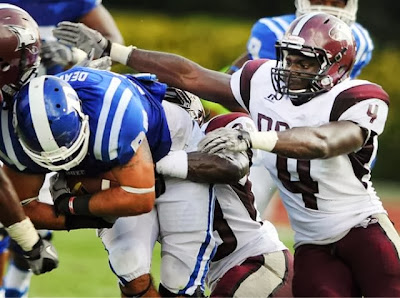 Defensive Players of The Week
Tazmon Foster, NCCU
The senior linebacker was all over the field for NCCU, piling up 17 tackles against Towson.
Deon King, Norfolk State
The sophomore linebacker had eight tackles (2.5 for loss) and two sacks in NSU’s 20-12 loss to Charleston Southern.
Freshman Of The Week
Mike Jones, NC Central
This honor goes to the freshman defensive back from Baltimore for the third week in a row. Jones picked off one pass against Towson and broke up another while adding four tackles.