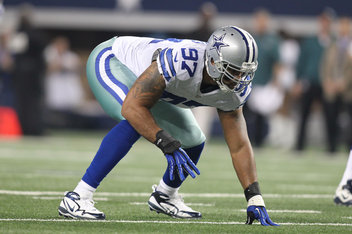 Week One of the NFL season is in the books, so it’s time to look at the HBCU alums who made an impact.

//platform.twitter.com/widgets.jsThe veteran defensive tackle had just two tackles against the New York Giants, but his sack of Eli Manning late in the fourth quarter was key in Dallas’ 36-31 win over their NFC East rivals.

@JDurant52 gotta chill wit this Real HU, think ima have to give him a call after this game
— Antoine Bethea (@Tweez41) September 9, 2013

//platform.twitter.com/widgets.jsThe eighth-year defensive back from Howard was all over the field for Indy on Sunday. He finished with 11 tackles and one big interception that helped preserve a 21-17 win for the Colts.

//platform.twitter.com/widgets.js After receiving spotty playing time in his first eight seasons in the league, Dimitri Patterson looks to have found a home in Miami. The Tuskegee product picked off two passes in the Dolphins 23-10 win over the Cleveland Browns on Opening Day.

Furthermore, reserve rusher William Hayes is better than any edge rusher the Saints through out there yesterday from the OLB spot.
— Zach Kidd (@GBBZach) September 9, 2013

//platform.twitter.com/widgets.js Coming off a career year his first season in St. Louis, Hayes made the Rams decision to resign him look good on Sunday. The defensive end from Winston-Salem State finished with three tackles and a sack in St. Louis’ 27-24 win over the Arizona Cardinals