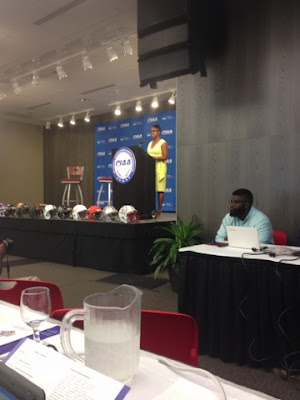 The CIAA held its annual Media Luncheon Thursday in the new Donald J. Reaves Student Center on the campus of Winston-Salem State. It was a fun day, with lots of laugh and excitement over the upcoming season. Per tradition, the conference released its predicted order of finish for 2013.

1. Winston-Salem State-The two-time lost more than two dozen players from last year’s team, but return five players on the preseason All-CIAA Team
2. Elizabeth City State-The two-time defending CIAA Northern Division champions are hoping to get over the hump and win the overall conference title.
3. St. Augustine’s– The Falcons have a veteran quarterback, a solid running game and some of the best pass rushers in the conference. But will that be enough to knock WSSU off its perch in a tough Southern Division?
4. Chowan-Coming off it’s best season in its short CIAA tenure, Chowan won’t be able to sneak up on other teams in 2013.
5. Shaw– Shaw has several key pieces coming back, but an unsettled quarterback position makes them a hard read.
6. Bowie State– Bowie’s defense is known for it’s hard-hitting style. The question is whether or not its offense can capitalize on that and score points.
7. Johnson C. Smith-JCSU finished second to WSSU in the Southern Division last season. With players like preseason All-CIAA QB Kahean Wallace and WR Fred Scott, the Golden Bulls are a threat to score on every play.
8. Virginia Union-The Panthers lost several key players from last year’s squad, which finished just 5-5 in 2012.
9. Fayetteville State-The big challenge for new head coach Lawerence Kershaw will be improving a passing game that threw for just six touchdowns in 2012.
10. Virginia State– New coach Latrell Scott has some pieces in place, but turning a program around will take time.
11. Livingstone-Unlike the other new head coaches, Daryl Williams has had a year to get familiar with his players. With building blocks like QB Drew Powell and linebackers Kenneth White, there is hope in Salisbury.
12. Lincoln (PA)– Another new coach, another rebuilding project.

Finally, five things that stood out:

//platform.twitter.com/widgets.js From the players to the coaches to the fans, Winston-Salem State was the subject of much discussion on Thursday. Fayetteville State’s Blade Shoop didn’t beat around the bush: “They (WSSU) are the top dog. We want a piece of that dog.”

While other coaches danced around the questions about WSSU, many posed by fans from online, Shaw’s Robert Massey took the question straight on.

“The goal is to beat WSSU,” he said. “Not to overlook anyone else, but they are the measuring stick. We strive to be better than Winston.”

Thursday was sort of a get-to-know you day for many media members, as four teams, one-third of the 12 teams in the conference, have new head coaches. Lincoln’s Ramon Flanigan talked about changing the culture for his team. Livingstone’s Daryl Williams talked about building on the players he inherited. Virginia State’s Latrell Scott talked about building a powerhouse program with in-state recruits. Fayetteville State’s Lawrence Kershaw wasn’t focused so much on changing the culture as much as getting the process of winning games down pat.

The CIAA made its student-athletes available for interviews along with their coaches for the first time, and the results were pretty good. While a few players gave conservative answers straight out of  their coaches’ handbook, others spoke candidly about everything from post-graduation goals to field turf differences. It was a pretty good tweet.

St. Augustine’s University DB Kharea Roseboro on crosstown rival Shaw: “We always get fired up to play Shaw.
Shaw DB Darnell Evans on competing for a CIAA Title: “My freshman year (2010) we won the championship…we want to get back to that.”
4) FSU’s Johnson All-CIAA Snub
Fayetteville State’s Michael Johnson had a breakout season as a sophomore, recording nearly 100 tackles and picking off four passes. His performance was good enough to warrant preseason All-American offers from some publications, but was somehow left off the preseason All-CIAA team. Go figure…
5) Maynor keeping things open
Following up a national championship appearance is never easy, especially when you lose more than two dozen players between seasons. Winston-Salem State’s Connell Maynor has continued to fill his program with talented transfer players, and 2013 should be no different.
Former Tennesse Vol E.J. Abrams-Ward is expected to compete for time at the quarterback position, while former Alabama signee Alfie Hill is expected to contribute as a defensive end/linebacker hybrid. Still, when asked about newcomers, Maynor was somewhat evasive.
“We’ve got some transfers, but they aren’t starters yet,” he said. “We don’t give away any spots. You’ve got to earn them. If you don’t, you won’t be on the field.”
That includes the quarterback position. Maynor said redshirt junior Anthony Carrothers, last year’s back up, is the front runner…for now.
“It’s Ant’s job to lose,” he said. “You’ve got to perform. If you don’t perform, you don’t play.”