We couldn’t put all the standout players in HBCU football on our Starting Five series, but we they couldn’t go recognized either. So here go a few more standout quarterbacks for 2013.

German started his career with a dazzling freshman season in 2011, and in 2012 he continued to show progress. The 2011 OVC Rookie of The Year emerged as perhaps the best quarterback in HBCU football, completing over 60 percent of his passes for 2751 yards and 18 touchdowns while leading Tennessee State to an 8-3 record in 2012. The big question surrounding German is whether or not he’ll be playing at Tennessee State next season. German was arrested in March and charged with felony vandalism and suspended indefinitely from the team. German was not allowed to participate in spring practice and, as of spring practice, head coach Rod Reed told Nashville’s City Paper he wasn’t sure if he’d be back in 2013.

“Right now, we’re planning that we’re going to play 2013 without Michael German,” Reed said. “If we’re fortunate enough to get Mike back that will be a plus but we have to move on right now with what we’ve got.”

This former Louisiana Tech transfer came up big in his first game at Bethune-Cookman, leading his team to a come-from-behind victory over Alabama State in the MEAC, SWAC Challenge. He’s more of an athlete than a quarterback, but a pretty awesome one considering he was put on the College Football Performance Award list for his play in 2012, which consisted of a total of 574 running yards, sixth best in the conference. Still, if Waters wants to claim the starting role from Quinten Williams, he will have to improve on his 47 percent completion percentage from 2012. 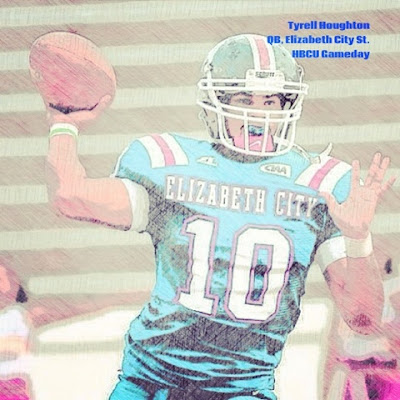 After taking a back seat the past two seasons, it looks like Tyrell Houghton will finally get a chance to run the Elizabeth City State offense. The redshirt junior made just one start in 2012, but he made a big impression, helping ECSU knock of SIAC Champion Tuskegee in the Pioneer Bowl. The Reidsville, NC product completed 14 of his 18 pass attempts for 118 yards and one touchdown. If he plays that well for an entire season, Elizabeth City could be looking at yet another division championship at a CIAA title shot.