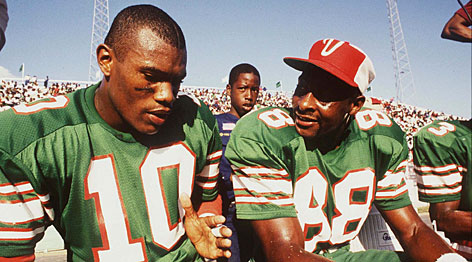 The following is the third in a series of posts highlighting the best NFL players at each position produced by HBCUs. The list is comprised of players who played their careers at HBCUs after 1970.

Before he became the Greatest Receiver of All-Time, Jerry Rice was known in HBCU circles as “World.” Legend has it he was given the name because “there wasn’t a ball he couldn’t catch in the world.” The Starkville, MS, native  came to Mississippi Valley State in 1981 as a lightly heralded recruit with no Division I-A scholarship offers. He left four years later as a first-round draft pick.

Rice’s career at MSVS really took off his sophomore year with the addition of strong-armed QB Willie Totten. That season, Rice caught 66 passes for 1,113 yards, great for any level of competition in the early 1980s. Rice and Totten spent the next three years racking up records and terrorizing the SWAC with their patented aerial attack. The numbers the two of them put up were simply ridiculous. After setting the NCAA record for receptions (102) and yards (1,450) as a junior, Rice bettered those numbers as a senior, catching 103 passes for 1,687. He also scored an amazing 27 touchdowns that season.

As spectacular as Rice was at Mississippi Valley, his professional career proved to be even better. Rice played an incredible 20 seasons in the NFL, breaking every major career receiving record while winning three Super Bowls. He owns the league records for career receptions (1,549)  yards (22,895) and touchdowns(208) and was selected to the Pro Football Hall of Fame in 2010.

Choosing the second best receiver was just as difficult as choosing the top one was hard. There are other receivers with gaudier stats, and I abhor equating championships with successful careers, but being a key contributor on a team that won four Super Bowl’s in a decade is a hard thing to overlook. Stallworth first made his mark at Alabama A&M, making the All-SIAC team in both his junior and senior seasons.

Stallworth was drafted by the Steelers in the 4th round of the 1974 draft and helped the team win its first-ever Super Bowl during his rookie season. Stallworth’s numbers his first couple of seasons weren’t that spectacular, but put that in context. He played during a run-heavy era on an especially run-happy team. He also played alongside another Hall-of-Fame receiver, Lynn Swann. Add in a few seasons where he missed a large chunk of games and it becomes clear that Stallworth can’t be judged on numbers alone.

Stallworth’s signature season came in 1984 when he returned from injury to have his best season ever, at the age of 32. Stallworth caught 80 passes for 1,395 yards and 11 touchdowns en route to being named Comeback Player of The Year. When he retired three seasons later, he owned every significant receiving record for the storied franchise. He finished his career with 537 receptions, 8,723 yards and 65 touchdowns and was elected to the NFL Hall-of-Fame in 2002.

The story of Jackson State’s Jimmy Smith is one filled with ups and downs, but an inspiring one none the less. In four seasons at JSU, he caught 110 passes for 2,073 yards and 16 touchdowns and was a second round pick in the 1992 NFL Draft. After arriving in Dallas at the start of the Cowboy’s 90’s dynasty, injuries limited Smith’s production and a dispute with owner Jerry Jones eventually led to Smith being released in 1994. After being cut from the Eagles, Smith finally found a home with the expansion Jacksonville Jaguars in 1995.

From 1996 to 2002, Smith put together a string of seven straight seasons of over 75 yards and 1,000 yards. Smith was a five-time Pro-Bowl selection who passed the 1,000 yard threshold nine times in his career, including the season prior to his retirement in 2005.  Smith finished his career with 862 receptions, 12,287 yards and 69 touchdowns.

Donald Driver is one of the modern HBCU to NFL success stories. Driver arrived at Alcorn State just after the Steve McNair era ended, catching a modest 88 passes for 1,993 yards during his time there. At the time Green Bay drafted him in the 7th round of the 1999 NFL Draft, he was probably more accomplished as a track athlete.

Driver didn’t become a starter until his fourth NFL season, when he caught 70 of Brett Farve’s passes for 1,064 yards, the first of seven 1,000 yard season in his career so far. Though he is on the back end of his NFL career, the four-time Pro Bowler was still a valued contributor for the 2010 Super Bowl Champs and remains a team leader as he prepares for his fourteenth NFL season. His 743 catches and 10,037 yards are both Packer records.

It’s likely that by the time John Taylor was drafted by the San Fransisco 49ers in the 3rd round of the 1986 NFL Draft, no one was happier about it than opposing coaches in the MEAC. During Taylor’s time at Delaware State, he terrorized the rest of the league. An electrifying returner as well as a speedy deep threat, Taylor scored 15 touchdowns his senior season, two of which came on kick returns. Taylor finished his career as the NCAA record holder for yards per catch with an amazing 24.3 per grab (the record has since been eclipsed by Hampton’s Jerome Mathis) and a dazzling 2,426 receiving yards.

In San Fransisco, Taylor teamed up with Mississippi Valley State’s Jerry Rice to form one of the most dangerous receiving duos of all-time. Taylor’s speed and deep threat abilities provided the perfect compliment to Rice’s deliberate, precise route-running. Taylor was largely used as a return specialist early in his career, however his role increased after he caught the game winning catch of Super Bowl XXIII. The next season he caught 60 passes for 1,077 yards and 10 touchdowns. Taylor would again go over 1,000 yards in 1991. For his career, Taylor caught 347 passes for 5,598 yards and 43 touchdowns. He also holds the Super Bowl record for punt returns and punt return average.

Though there are other receivers with far more catches and yards in their career, considering the offensive playmakers he played with (Rice, Roger Craig, Gary Clark) and his meaningful contributions to three Super Bowl champions, there’s no debating that Taylor is one of the best receivers ever produced by any HBCU.

After being selected as a defensive back from Grambling, Joiner went to have a long NFL career. Finished with 750 receptions 12, 146 yards and 65 touchdowns in an era where 1,000 seasons were rare. Elected to the HOF in 1996.

“Bullet Bob” was a running back under Jake Gaither at FAMU, but was probably better known for being the “fastest man in the world” in the 1960s. The Cowboys utilized Hayes speed as a wide receiver, and caught 371 passes for 7,741 yards and 71 touchdowns. Elected to HOF in 2009.